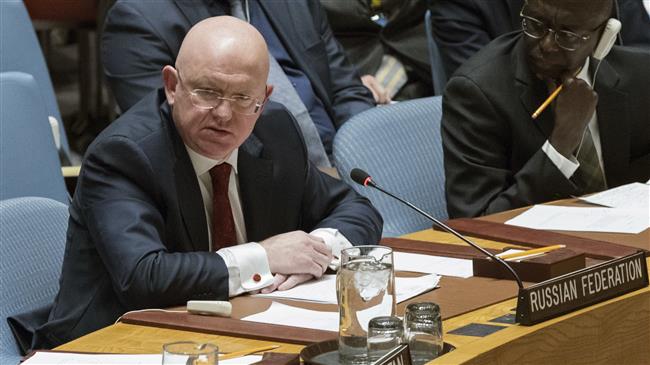 Russia has voiced opposition to a UN Security Council (UNSC) resolution, drafted by Western powers, on renewing anti-Yemen sanctions, which also seeks a “condemnation” of Iran for allegations of violating an arms embargo on the war-torn Arabian Peninsula state.

During a Wednesday meeting of the Security Council, Russian Ambassador Vassily Nebenzia said that instead of targeting Iran, the UN’s proposed measure should focus on the issue of sanctions against Yemen.

“We do not like condemnations at all, no, in general,” AFP quoted Nebenzia as saying. “It is a resolution about the extension of the working group, not about Iran. So we should concentrate on extending the working group first,” he added.

Nebenzia was referring to the working group of independent experts who oversee the implementation of sanctions against Yemen.

Last week, Britain circulated a draft resolution that would renew sanctions on Yemen for another year and also “condemns” Iran for allegedly breaching the 2015 arms embargo on the country by “failing to take the necessary measures to prevent the direct or indirect supply, sale or transfer” of short-range ballistic missiles, UAVs and other military equipment to Yemen’s Houthi Ansarullah movement.

The Ansarullah movement has been defending Yemen against a bloody Saudi-led military campaign, which was launched in 2015 with the help of the US and the UK to reinstall the country’s former Riyadh-friendly government.

The draft resolution, backed by France and the US, calls for unspecified measures in response to the UN report about Iran’s alleged role in Yemen, stressing that the UNSC will take “additional measures to address these violations,” and that “any activity related to the use of ballistic missiles in Yemen” is a criteria for sanctions.

The UNSC is expected to vote on the draft resolution next week.

Reuters quoted a senior UN diplomat as saying on condition of anonymity that, “It is fair to say the draft is not one the Russians are currently supportive of and they have made their views clear.

In a Wednesday meeting with UN Secretary General Antonio Guterres Iran’s permanent representative to the world body, Gholam Ali Khoshroo, also warned the Security Council that its support for any unilateral measure can aggravate the situation in Yemen.

A group of UN experts monitoring the sanctions on Yemen reported to the Security Council in January that it had “identified missile remnants, related military equipment and military unmanned aerial vehicles that are of Iranian origin and were brought into Yemen after the imposition of the targeted arms embargo.”

The UN experts, however, said they were unable to identify the supplier.

Both Tehran and Sana’a have repeatedly rejected the allegations as a fabricated scenario, and said the armed forces of Yemen have strengthened their missile power on their own.

Iran, along leading international human rights organizations, has called for an immediate end to the sales of arms by Washington, London and other Europeans to Saudi Arabia and other aggressors, who are killing innocent Yemeni people on a daily basis.

Earlier this week, Tehran rejected fresh allegations by the UK and France of Iranian missile delivery to Yemen as “foolish” as the war-torn country has been kept under an all-out siege by the Saudi regime and its allies.

In late January, Nebenzia along with other UN Security Council ambassadors visited Washington to inspect debris purportedly from a Yemeni missile that reached deep inside Saudi territory in a retaliatory attack last year, with the US claiming that it was supplied by Iran.

Following the visit, the senior Russian diplomat said the purported evidence presented by the US is not conclusive, stressing there is no case for any UN action against Tehran, which he said is “vehemently denying it is supplying anything to Yemen.”

The Saudi war on Yemen has so far killed around 13,600 people and reduced much of the country’s infrastructure, including hospitals, schools, and factories, to rubble.

The campaign and the siege have triggered the world’s worst humanitarian crisis in the country, as the UN has put it.

The US and the UK have been the main arms suppliers to the Saudi regime over the past three years.

During his first trip to Saudi Arabia last year, US President Donald Trump signed a $110 billion arms deal with the Saudis, with options to sell up to $350 billion over a decade.

According to statistics by the UK’s Department for International Trade (DIT), Britain’s sales of military equipment to Saudi Arabia hit £1.1 billion in the first six months of 2017.

Tehran has on numerous occasions called on the Saudi regime and the coalition of its allies to end the war and allow Yemen’s political groups to resolve their internal conflict through intra-Yemeni dialog.

The Islamic Republic has also submitted a four-point peace plan on the Yemen crisis to the United Nations.

Khorshroo on Wednesday reaffirmed Tehran’s readiness to cooperate with the new UN special envoy for Yemen, Martin Griffiths, to put an end to the ongoing crisis in the country.

Hezbollah: We’ll Defend every Single Meter in Our Territory