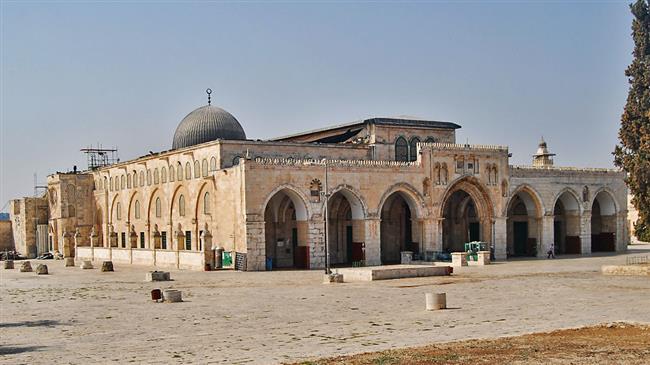 US plans to open embassy in Jerusalem al-Quds in May: Officials

The United States is reportedly planning to open its embassy in Jerusalem al-Quds in May, US officials say.

An official, speaking on condition of anonymity, said on Friday that most embassy staff will remain in Tel Aviv.

“Come May, we’re moving the ambassador and a small team to Arnona,” the compound that currently houses the consular operations of the US Consulate General in Jerusalem al-Quds, the official said.

“What will happen by May, is a sign will be put up in Arnona identifying the facility as the US Embassy,” the official added.

Another US official, also requesting anonymity, added that a new embassy building will be later constructed in another location in Jerusalem al-Quds.

US President Donald Trump on December 6 defied global warnings and said Washington formally recognized Jerusalem al-Quds as the capital of Israel and would begin the process of moving its embassy to the occupied city, breaking with decades of American policy.

His decision infuriated the Palestinians, who declared that Washington could no longer play a role as lead mediator in the Middle East peace process. It also sparked outrage across the Muslim world and even Washington’s Arab allies.

The United Nations General Assembly on December 21 overwhelmingly voted in favor of a resolution that calls on the US to withdraw its controversial recognition of Jerusalem al-Quds as the Israeli capital.

The 193-nation assembly adopted the resolution by a decisive vote of 128 to 9, with 35 abstentions.

The scheduled opening of the US embassy in May appears to represent an earlier time frame than what had been expected.

During an address to the Israeli Knesset (parliament) on January 22, US Vice President Mike Pence said Washington was planning to relocate the country’s embassy in Israel from Tel Aviv to Jerusalem al-Quds “by the end” of 2019.

“Jerusalem [al-Quds] is Israel’s capital, and as such President Trump has directed the State Department to immediately begin preparations to move the United States embassy from Tel Aviv to Jerusalem [al-Quds],” Pence said to prolonged applause from Israeli lawmakers.

According to one of the US officials, the new US embassy in Jerusalem al-Quds would open on May 14 to coincide with the 70th anniversary of Nakba Day (Day of Catastrophe), which marks the anniversary of the forcible eviction of hundreds of thousands of Palestinians from their homeland by Israelis in 1948.

US Congress is reportedly being notified of the impending move on Friday. Secretary of State Rex Tillerson signed off on the security plan for the new embassy on Thursday.

US decision provocation to Arabs: PLO

Meanwhile, a senior Palestine Liberation Organization (PLO) official has said Washington’s decision to open its embassy in May to coincide with Nakba Day “is a provocation to Arabs.”

“The American administration’s decisions to recognize Jerusalem al-Quds as Israel’s capital and choose the Palestinian people’s Nakba as the date for this step is a blatant violation of international law,” AFP quoted Saeb Erekat as saying.

Erkat added that the move will result in “the destruction of the two state option, as well as a blatant provocation to all Arabs and Muslims.”

Israeli Intelligence Minister Yisrael Katz also on Friday congratulated the US president for announcing Washington’s plan on the opening of the new embassy.

Earlier in the day, hundreds of Palestinians held a fresh rally in the besieged Gaza Strip to express their protest against President Trump’s recognition of Jerusalem al-Quds as Israel’s capital.

The demonstration was held in Nuseirat refugee camp in the central Gaza Strip after protesters took to the streets following the Friday prayers and chanted slogans.

Don’t Be Fooled by Saudi ‘Aid’ Efforts in Yemen