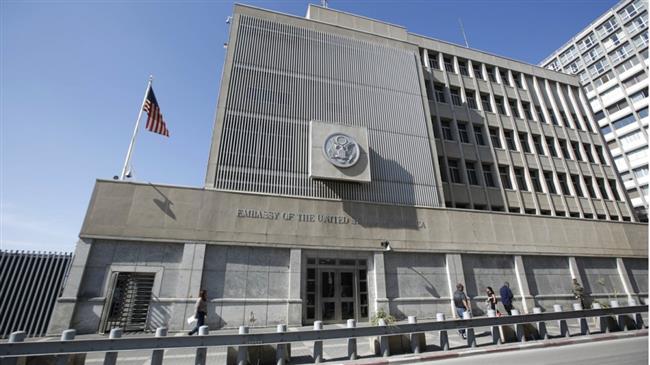 Muslim scholars demand uprising over US embassy opening in al-Quds

An international organization of Muslim scholars headquartered in Qatar has called for a “public and official uprising” against a recent decision by the United States to move its embassy to occupied Jerusalem al-Quds in May.

“We call for a Palestinian, Arab and Islamic uprising against this American aggression,” Secretary General of the International Union of Muslim Scholars (IUMS), Ali al-Qaradaghi, said in a statement on Sunday.

He added, “Jerusalem al-Quds is the cause of [our Muslim] nation and abandoning it or changing its identity will be a disgrace.”

Qaradaghi further described the US decision to move its embassy from Tel Aviv to Jerusalem al-Quds as a “declaration of war on Muslims and a step to legitimize an illegitimate occupation.”

On Saturday, the Palestinian Islamic resistance movement, Hamas, strongly condemned the Washington’s move, terming it as “provocative” for all Muslim and Arab nations.

The measure to relocate the US embassy concurrent with the 70th anniversary of Nakba Day (Day of Catastrophe), when hundreds of Palestinians were forcibly evicted from their homeland by Israeli regime forces back in 1948, is a naked [act of] aggression against the Palestinian nation, the Hamas spokesman, Abdullatif al-Qanou, told Press TV in an exclusive interview in Gaza City.

He added, “It is also a provocative move against all Muslims and Arabs, and a clear attack against sites revered by both Muslims and Christians. Hamas believes that such a decision would fail to change the status quo of al-Quds.”

US State Department spokeswoman Heather Nauert said on Friday that Washington planned to open its embassy in Jerusalem al-Quds in May.

The occupied Palestinian territories have witnessed a new wave of tension ever since Trump announced his decision on December 6 last year to recognize Jerusalem al-Quds as Israel’s capital and relocate the US embassy in Israel from Tel Aviv to the occupied city.

On December 21, the UN General Assembly overwhelmingly voted in favor of a resolution that calls on the US to withdraw its controversial recognition of Jerusalem al-Quds as Israeli “capital.”

In an attempt to avert the resolution, Trump had warned that “we’re watching,” threatening reprisals against countries that backed the measure, which had earlier faced a US veto at the UN Security Council.

Israel, however, rejected the world body’s resolution while thanking Trump for his decision to move the US embassy from Tel Aviv to Jerusalem al-Quds.

On January 18, the US reneged on a pledge to contribute $45 million to the UN Relief and Works Agency for Palestine Refugees in the Near East (UNRWA), which supports more than 5 million registered Palestinian refugees and their descendants.

In a series of tweets on January 2, Trump said that the US paid “the Palestinians hundreds of millions of dollars a year” and yet got “no appreciation or respect.”

“But with the Palestinians no longer willing to talk peace, why should we make any of these massive future payments to them?” he asked.

Today: UN will vote on Iran for alleged arms violation