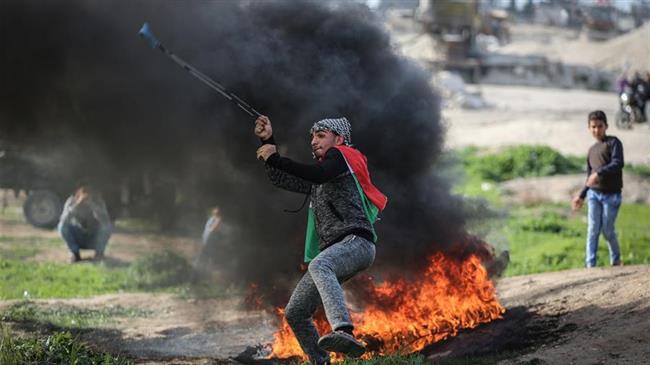 A middle-aged Palestinian man has sustained serious gunshot wounds over an alleged car-ramming attack in the northern part of the occupied Palestinian territories as tensions continue to simmer in the aftermath of US President Donald Trump’s recent declaration of Jerusalem al-Quds as the capital of Israel.

Israeli media outlets alleged that a 51-year-old Arab man from the town of Shfaram, whose identity was not immediately available, began his rampage in the northern coastal city of Acre on Sunday morning, after receiving a parking ticket of 1,000 Israeli shekels ($290.60).

In the video footage that captured the incident, the driver can be seen accelerating his Hyundai sport utility vehicle through a junction on Yehoshafat Street near the city market, where a uniformed paramilitary man is crossing, striking him and sending him flying into the air.

The driver then continued toward a train station and rammed two Israeli soldiers before he was shot and stopped by an armed soldier who was at the scene.

One eyewitness said he was standing at the train station when he suddenly heard screams.

After that I heard a few gunshots, I crossed the road towards the parking lot of the market, saw two soldier lying on the ground, one near the side of the station and the other near the vehicle,” he said.

The witness added that the gunshots were fired by more than one person, likely soldiers and the border police.

An unnamed Israel’s emergency medical service official, Magen David Adom, said the three Israeli soldiers were all in their 20s, while the injured Palestinian driver was in critical condition. Israeli officials said they were investigating the matter.

The occupied Palestinian territories have witnessed a new wave of tension ever since Trump announced his decision on December 6 last year to recognize Jerusalem al-Quds as Israel’s capital and relocate the US embassy in Israel from Tel Aviv to the occupied city.

On December 21, the UN General Assembly overwhelmingly voted in favor of a resolution that calls on the US to withdraw its controversial recognition of Jerusalem al-Quds as Israeli “capital.”

In an attempt to avert the resolution, Trump had warned that “we’re watching,” threatening reprisals against countries that backed the measure, which had earlier faced a US veto at the UN Security Council.

Israel, however, rejected the world body’s resolution while thanking Trump for his decision to move the US embassy from Tel Aviv to Jerusalem al-Quds.

On January 18, the US reneged on a December pledge to contribute $45 million in food aid to the UN Relief and Works Agency for Palestine Refugees in the Near East (UNRWA), which supports more than 5 million registered Palestinian refugees and their descendants. The announcement came only two days after US State Department said it would withhold another $65 million in funding to UNRWA.

In a series of tweets on January 2, Trump said that the US paid “the Palestinians hundreds of millions of dollars a year” and yet got “no appreciation or respect.”

“But with the Palestinians no longer willing to talk peace, why should we make any of these massive future payments to them?” he asked.