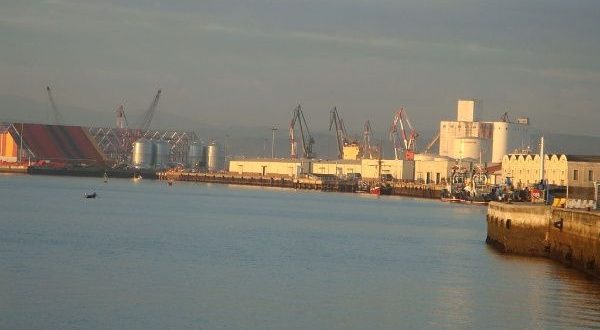 The Bahri Hofuf ship was already kicked out of Bilbao, but sneaked into Santander.

In the first days of March, a Saudi cargo ship docked on the Spanish port of Santander to load weapons with Yemen as its final destination and activists are trying to kick it away.

The Saudi Bahri Hofuf ship had been loading weapons since July in the Bilbao port until it got expelled due to pressure from individual activists and organizations in the Basque Country, including Green Peace’s local chapter.

But that didn’t mean the ship had disappeared from Spanish waters. The Basque NGO Ongi Etorri (which means “welcome” in Euskera and is usually busy taking care of incoming refugees) had been tracking the Saudi ship through its mandatory geolocator device when the Bahri turned it off for 24 hours, only to reemerge already docked in Santander.

“The ship had been docked in Santander already when the system was reconnected,” said Aurora Otero, an activist from the Safe Passage (Pasaje Seguro) NGO, who also said the ship flag identifying its dangerous cargo and its name erased to prevent identification.

The activists have carried out a series of informative brigades, lobbying efforts and grassroots networking in order the expel the ship from the country, gathering more than 18,000 signatures so far in a Change.org petition.

“Even though we think this is the first time this ship comes to Cantabria, we don’t want it to become a regular thing. This ship is not welcomed. The weapons it’s loading will be used to massacre Yemeni people in an extremely cruel conflict that’s underreported by media. A war that has taken the lives of more than 10,000 people and has left two million displaced, half of them with no shelter,” says the petition.

Now, the Unidos Podemos electoral alliance of left-wing parties is supporting the activists’ cause and has demanded explanations from the Spanish government.

Led by the Podemos representative in Bizkaia David Carracedo, the political party’s parliamentary group confirmed that the Bahri Hofuf ship turned off its tracking device on March 7, 00:11 a.m. near the commune of Saint-Nazaire in France, only to be reconnected by 08:45 a.m. March 8 in Santander.

On that day, Otero warned her feminist colleagues about the issue during a march, asking for support from activists that opposed the Saudi-sponsored war in Yemen.

Other political parties, such as the center-left Spanish Socialist Workers’ Party (PSOE) and Santander Si Puede have joined the demand.

The activists think that the ship is loading weapons such as grenades and rockets manufactured in Alava, Guipuzkoa and Burgos.

“For the security of those who live in Santander and because the weapons that the Saudi Kingdom ship is loading will surely kill a lot of civilians in Yemen, the Santander municipality and the Government of Cantabria should reject authorization for the Bahri Hofuf to load death in its warehouses,” the activists said.

Breaking : the missile force fires a ballistic missile at a Saudi camp in Asir