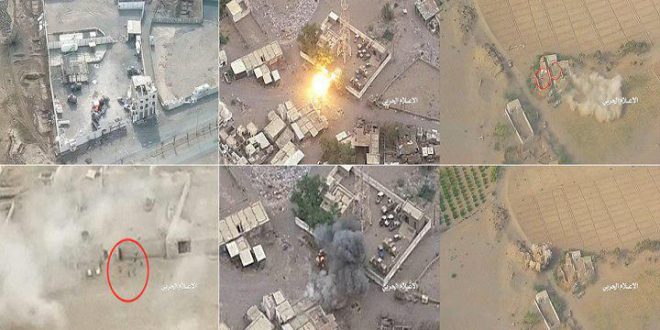 The Yemeni Army and Ansarullah published on Tuesday scenes of joint operations of the artillery and the air force units, targeting concentrations and armored vehicles affiliated with the Saudi-led coalition in the West Coast.

The drone documented the scenes of the artillery carrying out an operation with the air force units based on aerial monitoring with missiles and mortars, striking Saudi/UAE concentrations and military vehicles in the west coast.

The scenes displayed full compatibility between the two units with the accurate targeting of the artillery shells on the military targets, which were previously coordinated by the UAVs of the air force.

The scenes also showed the targeting of a number of groups of Saudi/UAE-paid militias on the fronts within the West Coast, killing and injuring dozens of them, in addition to the destruction of a number of vehicles and fortifications. The targeted members were documented in fear as they were attempting to mass escape following strikes of artillery and mortars targeting them, which forced the coalition to launch calls of distress from the shells launched on their sites.

The Saudi-UAE militias accused the artillery force of targeting homes of citizens in the West Coast; however, the scenes showed that the houses of the citizens – the alleged – are only barracks for military gatherings that were demolished by the artillery shells.

The scenes exposed the falsifications made by the Saudi-led coalition as it uses civilians as shields by stationing in residential communities and taking some houses and government buildings as barracks and military bases.