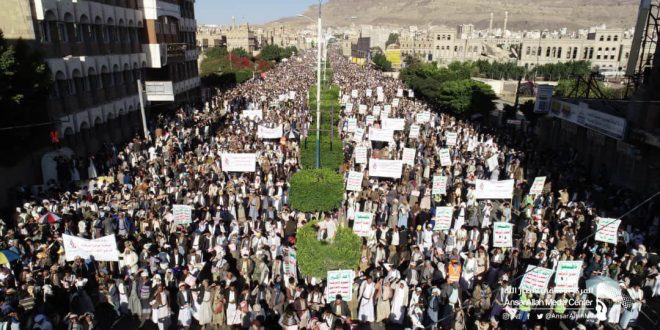 The capital of Sana’a witnessed on Friday a huge rally in Bab al-Yemen Square for the commemorations of the martyrdom of Imam Zaid under the slogan ” A Revolution against the coalition of criminality and starvation”.

The participants in the event confirmed that they will take the path of Imam Zayd (peace be upon him), where he sacrificed himself in fighting oppression and arrogance.

The participants in the event pledged the Saudi-led coalition to also fail in its economic war like it has failed militarily for nearly four years.

During the event, a statement was made, calling upon all the Yemeni people, in the north and south, to revolt against the criminal coalition that brought the Yemenis nothing but death and destruction wherever it was found, and who took revenge and starved civilians in areas under its control.

The event witnessed a number of speeches and events that mentioned the biography of Imam Zaid bin Ali peace be upon them and his eternal revolution against arrogance, stressing that Yemenis must continue his revolution and the need to fight injustice and achieve victory for the Yemeni people.

Stability of the Yemeni riyal within 24 hours