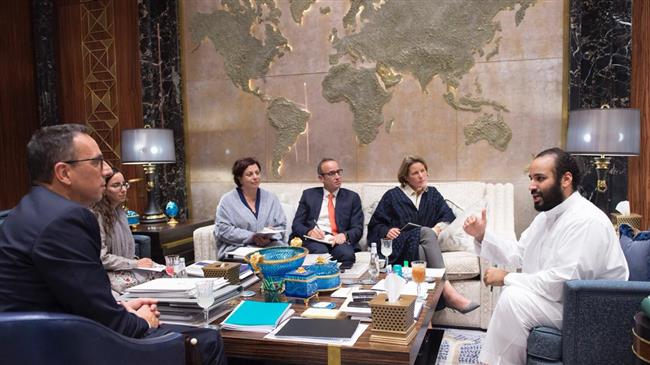 Riyadh Will pay US ‘nothing for our security’: Mohammed Bin Salman

Saudi Crown Prince Mohammed bin Salman says Riyadh “will pay nothing” to the United States for the kingdom’s “security,” in rebuttal to US President Donald Trump who recently said King Salman would not last in power “for two weeks” without US military support.

“Actually we will pay nothing for our security. We believe that all the armaments we have from the United States of America are paid for, it’s not free armament,” the Saudi crown prince said in a Bloomberg interview conducted on Wednesday and published on Friday.

He made the comments in response to a question whether Riyadh needed to pay Washington more for its security.

“Ever since the relationship started between Saudi Arabia and the United States of America, we’ve bought everything with money,” he further said, adding that since Trump came to power, the kingdom decided to purchase over 60 percent of its needed armament from the US “for the next 10 years.”

The 33-year-old crown prince went on to say that Saudi Arabia had agreed to buy $110 billion worth of US weapons and signed investment deals worth billions more, some “$400 billion” in total, since Trump took office in early 2017, and described the deals as “a good achievement” for Trump.

“Also included in these agreements are that part of these armaments will be manufactured in Saudi Arabia, so it will create jobs in America and Saudi Arabia, good trade, good benefits for both countries and also good economic growth. Plus, it will help our security,” Bin Salman further noted.

His interview came a day after Trump told a cheering crowd of supporters at a rally in Southaven, Mississippi, that Saudi King Salman would not last in power unless the US provided military support for the Arab kingdom.

“We protect Saudi Arabia. Would you say they’re rich? And I love the King, King Salman. But I said ‘King — we’re protecting you — you might not be there for two weeks without us — you have to pay for your military,’”, Trump said.

On Saturday, Trump said at a rally in West Virginia that although the Saudis “have got trillions of dollars”, “we don’t get what we should be getting” from them. He also stressed that with the support of Washington Saudi Arabia is “totally safe”, but “without us, who knows what’s going to happen.”

Pressed on how he would regard Trump’s humiliating and harsh rhetoric against Saudi Arabia, bin Salman said, “I love working with him,” referring to the controversial remarks as a “bad issue” offset by “99 percent of good things.” His response, however, prompted the interviewer to say that “it seems to be a little bit more than one percent.”

Last year, Trump signed the largest arms deal in history with the Arab country despite warnings that he could be accused of being complicit in the regime’s war crimes in Yemen.

On Wednesday, Saudi Arabian Military Industries’ (SAMI) Chief Executive Andreas Schwer said he expected to finalize the first partnership deals with South African arms companies by the end of the year, without mentioning the initial partners by name.

Last December, Russia said it was working with Saudi Arabia to finalize the agreement to sell the S-400 Triumf, the latest Russian long-range anti-aircraft missile system.

Saudi King Salman made a four-day trip to Moscow in March 2017. During the visit, Russia also agreed to sell Riyadh a Kornet-M anti-armor system, Tos-A1 rocket launcher, AGS-30 grenade launcher, and Kalashnikov AK-103, according to the information office of Russia’s Federal Service for Military-Technical Cooperation.

Saudi Arabia and allies invaded Yemen in March 2015 to reinstate Riyadh-allied former officials. The coalition has failed to achieve the goal despite superior military power. Instead, some 15,000 Yemenis have been killed in the war.

The Assassination of an Islahi Journalist in Dhale Southern Governorate