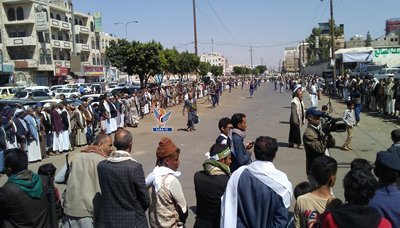 Residents of Sha’oub district of the capital Sana’a held on Thursday a demonstration to condemn the ongoing aggression and economic war on Yemen.

During the demonstration, speeches delivered underlined the importance of constant mobilization in the district to back up the battlefronts in defending Yemen, its security and stability.

Sheikhs, social and educational figures of the Sha’oub district also took part in the demonstration in a way to express their outrage of the current unprecedented inflation due to the Saudi economic war.

The coalition to cancel the Yemeni identity in southern Yemen: Yemeni officials