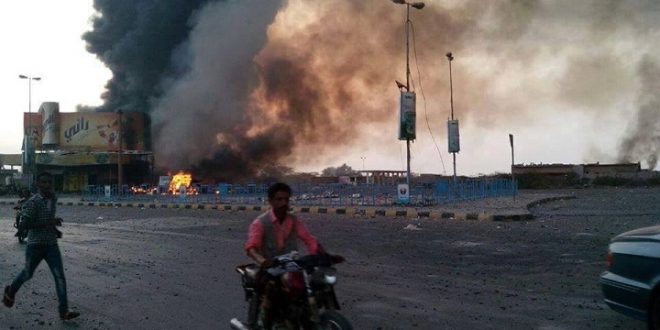 Security sources within the coastal province of Hodeidah, West of Yemen, said that there is no truce in the province and what has the Saudi-led coalition claimed of a ceasefire is just an allegation to start a new escalation on the port city.

The source said that the Saudi-led warplanes conducted on Saturday night a series of aerial brutal raids on residential neighborhoods in the city amid intensive hovering of coalition fighter jets.

The source said that the coalition joint air force launched two raids on a farm of a citizen in the village of Zaafran in the Durayhami district, and three raids on the al-Lahiah town near the rural hospital in the city, while three other raids targeted the district of al-Jerahi.

The security source said that the hovering of Saudi-UAE warplanes continued intensively in conjunction with indiscriminate artillery shelling on several areas in Hodeidah.

The head of the Supreme Revolutionary Committee confirmed that any escalation after the departure of the UN special envoy to Yemen Matin Griffith to achieve peace in the country is a proof of chaotic and reckless coalition regimes on Yemen.

“Any escalation after the envoy leaves the capital Sana’a, who has come to deliver messages of peace, is evidence of anarchic and reckless regimes that run the aggressive coalition against the independent republic of Yemen,” Houthi said on Twitter.

He added: “I think it will be an insult to the efforts built in this regard, and a way to thwart the UN envoy, who has clarified his position with the national delegation who will confirm the certainty of the other’s side in rejecting peace.”

The UN envoy has left the capital Sana’a yesterday after a brief visit during which he met with the leader of the Yemeni revolution, Sayyid Abdul-Malik Badreddin al-Houthi who has assured the participation of the national delegation in the negotiations that will be held in Sweden in a few days.

The head of the national negotiating delegation, Mohamed Abdel Salam, said on Sunday that the escalation of the US-backed Saudi-led coalition undermines the efforts of UN envoy Martin Griffith and reveals intentions to thwart all peace efforts.

“The Saudi-led warplanes launched more than 35 air strikes during the past 12 hours on the city of Hodeidah with heavy artillery shelling and rocket fire on the houses of citizens and residential neighborhoods in blatant and clear denial of the truce alleged by the coalition,” he wrote in a tweet on his tweeter page.

The head of the national delegation and spokesman Ansar Allah said: “This escalation undermines the efforts of the UN envoy and reveals the intentions intended to thwart all peace endeavors.”

Saudi latest crime was on Saturday evening, where a number of 9 citizens were killed and injured after the Saudi-led coalition carried out an aerial raid on a gas station located near a market in Hajjah province.

The coalition military warcraft launched an air strike on the gas station of Abdo al-Khamisi, which resulted in killing a number of four citizens and wounding five others, in a preliminary toll.

This crime comes in the context of the almost daily crimes committed by the aggressive Saudi-led coalition against the citizens of Yemen for nearly four years amid international regard and the global absence of such crimes that have killed thousands of Yemenis.

A number of Western countries, the United States and Britain in particular, are also accused of being complicit in the ongoing aggression as they supply the Riyadh regime with advanced weapons and military equipment as well as logistical and intelligence assistance.