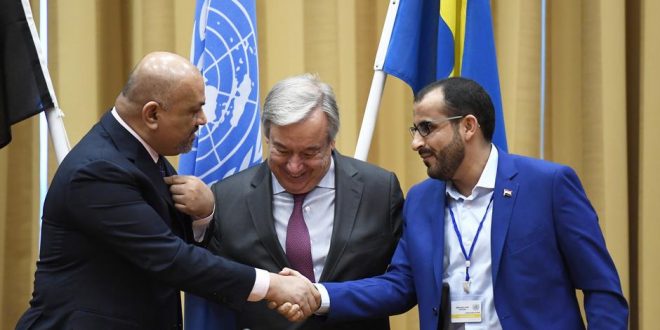 It is clear from the title of the opening article of Al-Sharq al-Awsat newspaper, which is funded by the Saudi Royal Court, that the alliance does not want to withdraw from Hodeidah in accordance with the provisions of the Swedish agreement. Justifying this coup against the agreement with a number of speculative reasons, such as Sana’a’s rejection of the agreement.

It also referred to ,talking about the war in Yemen, explained that the Saudi intervention in Yemen was not to support a Yemeni political team over another, but because Saudi Arabia could not coexist with the other side – that is, Ansar Allah – which exposes the size of the Saudi intervention Yemen over the past decades.

Adding that “Saudi Arabia, UAE, Sudan and the rest of the coalition forces can withdraw from Yemen, but we should be aware of the consequences, claiming that the declaration of the coalition to end the war will lead Yemen to a civil war, and will copy another Syria.

“It also pointed out to Saudi fears of ballistic missiles and the entry of fighters from outside Yemen.

The London- published Saudi newspaper tried to sway the West by dragging them to their side when saying that the survival of Ansar Allah and their control of Bab al-Mandab would harm Europe and the United States as a result of the possible chaos if it withdrew from Yemen, added that Saudi Arabia is able to export most of its oil destined westward to the Red Sea via pipelines without passing through Bab al-Mandab.

Ironically the article pointed that the withdrawal of the coalition countries will result in a significant spread of al-Qaeda members in Yemen, therefore the Western countries will send their forces to fight the terrorist organization in Yemen, as what happened in Iraq, Syria and Afghanistan.

However in contrary to what is happening on the ground, Saudi Arabia has been and continues to be the main source and a major supporter of al Qaeda, but this organization quickly disappeared from the Yemeni provinces where there are Ansar Allah while terrorist groups are active in many areas of presence Saudi and UAE.

The newspaper pointed out that the withdrawal of Saudi Arabia and its allies will not stop the war and will not reduce the human losses. On the contrary, the humanitarian tragedy will worsen, considering that the fall of more than ten thousand civilians since the outbreak of aggression which makes this war the bloodiest war in the region.

The peace consultations between the Yemeni warning parties, hosted by Sweden was set to an end last Thursday with the agreement to exchange 14,000 prisoners from both sides and agreed to a ceasefire in the city of Hodeidah.