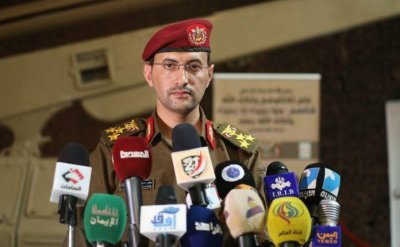 Spokesman of the army Brig. Gen. Yahya Sarie on Saturday held a press conference, reviewing the ceasefire violations committed by Saudi-led coalition in Hodeidah province and its escalation in all fronts during January 2019.

According to the spokesman, the violations committed by the Saudi forces and paid-militias in Hodeidah last month amounted to 3,819 violations, including launching 222 rockets and 2,512 shells, 680 breaches of firing from medium and light weapons, 22 acts of establishing new sites, 286 acts of reinforcements, nine offensive attempts, and 106 breaches of warplanes and reconnaissance aircrafts.

Sarei indicated that the total breaches committed by the US-backed coalition forces since the ceasefire entered into forces have amounted to 4,621 breaches, presenting videos of US-backed Saudi airstrikes on the east of Tuhayta district in the province.

He noted that what is happening in Hodeidah is not just a violation of the ceasefire, “but a serious military escalation and the large number of daily violations confirm that.”

“There have been continuous attacks on the homes of citizens, including the assault on a citizen’s house in the area of 7 July, as well as attacks on many areas south and east of Hodeidah,” Sarei said.

The spokesman confirmed that those breaches and military escalation left dead and wounded civilians and destruction to citizens’ property.

Sarei confirmed that the army and popular committees have proved their full commitment to the ceasefire in Hodeidah, saying “Sweden agreement does not need more observers rather than it requires compelling the enemy to comply with the voice of peace.”

“Many of the violations occurred during the presence of the UN monitoring team,” he said, stressing that the failure to identify the obstructing party threatens the agreement implementation.

The total air raids of the Saudi-led coalition on the Yemeni provinces in January amounted to 719 raids, including 357 on Saada, 142 on Hajjah and 54 Sanaa, while the rest of raids targeted the capital Sanaa and the provinces of Jawf, Dhamar, Marib, Taiz, Hodeidah, Amran and Raymah, according to the spokesman. He added that the raids caused the killing of 88 citizens, including 22 children, eight women and 58 men, while 117 citizens, including 31 children, 16 women and 70 men, were injured.

On Friday, a child was killed in the Saudi/American bombing on Razih area of Saada, while two children were wounded in al-Jabalyah area of Tuhayta district in Hodeidah.

On the situation on the other fronts, Sarei explained that the enemy carried out during January more than 118 military operations on several fronts, including 90 offensive attempts and 28 infiltration attempts. He referred that the Saudi-led coalition forces and their militias specifically suffered large losses during those offensive attempts, which were repelled by the army forces.

Regarding the response to the Saudi-led coalition escalation, the spokesman said that the army and the popular committees carried out more than 197 operations during January, including 55 offensive operations, in which drones of the air force participated in 12 operations.

The army engineering units operations in last January amounted to 146 operations, while the snipping units carried out 695 operations, which resulted in the killing of 57 Saudi soldiers and officers and 17 Sudanese mercenaries, as well as sniping four snipers, and damaging 15 military vehicles, 23 weapons and three military equipment.

The anti-armor unit conducted dozens of operations, which resulted in the destruction of 70 armored vehicles and eight tanks, including four BMB tanks on the border fronts, 13 vehicles and four military bulldozers, as well as targeting 56 gatherings and destroying 22 various weapons.

“The armed forces relied on the counter-attack in a timely manner and were able to inflict heavy losses in the ranks of the enemy,” said the spokesman, noting that the ability of the army and the popular committees to move from defense to attack confused the enemy and weaken the level of its offensive military operations.

Sarei confirmed that the next stage would witness qualitative operations that have not been implemented before and would represent an important shift in the battle with the enemy.

“Bringing more foreign mercenaries, especially from African countries, will add nothing to the enemy’s strength, but more losses and setbacks,” he said.