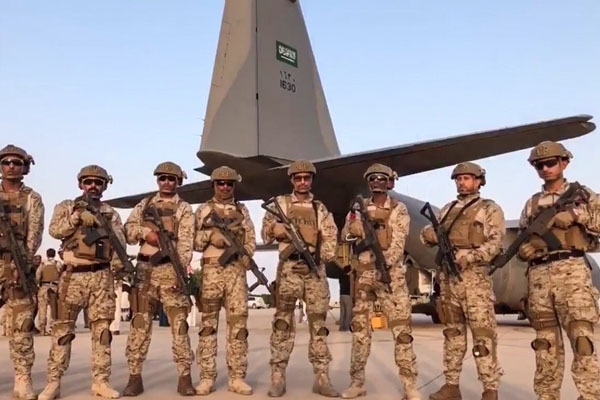 Saudi Arabia has taken control over the province’s seaports and airports, using them to deploy hundreds of troops in the region.

In January, Saudi documents marked as a “very secret” status issued by the Ministry of Interior “border guards” and from the Saudi royal court, confirms to those who justify the presence of Saudi in Mahrah, and claims the stupidity that “Saudi” came for sake of the sons of  the province.

The head of the Supreme Revolutionary Committee, Muhammad Ali al-Houthi, in addition, said that the ambitions of the coalition have become apparent in Maharah, Socatra ,Aden, Hadramout and others province, stressing that the coalition forces did not come for the alleged legitimacy that launched their war against Yemen under its false banner, but for the occupation.

Al-Houthi stressed that the Yemenis are betting on the armed forces in addressing the coalititon, and to protect the Republic of Yemen and sovereignty and independence.

A human rights report also revealed that Saudi and Emirati forces in Al-Mahrah province have committed a number of human rights violations against civilians in the province, which is far from areas of conflict. A report in the human rights office in the province stated that Saudi Arabia captured Al-Juhaida International Airport, where the Saudi forces were carrying out a series of violations, as well as turning a civilian facility (airport-port) into a military base. Arbitrary detention and enforced disappearance, Legally empowered, and physical and psychological violence are some of these violations.

The Yemeni Foreign Ministry affiliated with the Houthi Ansarullah movement said in a statement that Saudi Arabia was “desperately attempting” to take advantage of the “ongoing state of insecurity by plundering oil resources and pursing its illegitimate interests across the region.”

The statement further explained that Saudi Arabia was committing a blatant violation of international law by transporting Yemeni oil to the Arabian Sea through a pipeline which extends from the Rub’ al-Khali desert to Hadhramaut and Mahrah in the south of the country. It also called on the United Nations and other international organizations to counter through legal mechanisms the Saudi aggression, occupation and looting of Yemeni resources.

Many view Saudi presence and its alleged development projects as a pretext for the kingdom to entrench its control in the country by controlling Yemen’s highly vulnerable infrastructure, US daily ,the Wall Street Journal, said.

“We are under Saudi occupation. We don’t need the Saudis,” it quoted former deputy governor of al-Mahra Ali bin Salem al-Huraizy, who has helped organize protests against the Saudi presence in the past.

Civilians sources told YemenExtra , in March, that a huge Saudi-led military forces arrived to the eastern of Yemen.

Troops, military vehicles, equipment and mobile houses belonging to Saudi-led coalition were dispatched to the Sihut coastal district, to establish a military base in eastern Yemenn near to the Sultanate of Oman.According to the sources, the Saudi regime aims to establish the military base as part of its effort to control the eastern gate of Yemen and to establish what so-called “Salman Channel”, a project which will link the Arabian Gulf to the Indian Ocean as an alternative corridor for the “Strait of Hormuz”, which is supervised by Iran.

It also to ensure the passage of the Saudi Arabian oil carriers through that channel, after the United Arab Emirates forces imposed full control over Hadramaut province, which was planned channel to pass through.

Why UN Not Documenting Saudi-led Crimes in Yemen?