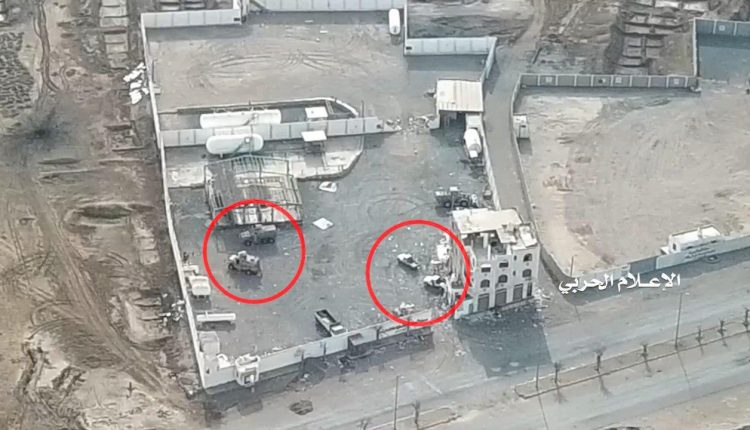 What happened after the Saudi-led coalition caused humantrian crisis to Yemen!

Yemeni army forces have caused  the Saudi-led coalition, backed by the US, during two aerial operation in retaliation for the ongoing coalition-led military campaign against Yemen.

The Joint Air Force of the Yemeni army forces  carried out a joint operation on Friday, targeting the paid fighters of the coalition in the Nehm Front east of Sana’a province.
A military source said that the artillery support unit, targeting large military concentrations of the paid fighters , a number of missiles, after a careful monitoring ,carried out by a march aircraft on the outskirts of the front of Nehm, confirming that the operation achieved its goal with high accuracy, leaving scores of dead and wounded among the ranks of paid fighters, and material losses.

Last month, it also launched an attack on military camp belonged to the coalition in Marib.

A source in the Air Force confirmed that the air attack targeted the camp of the paid fighters and hit its targets accurately.

In the context of justifying the upcoming military escalation against Hodeidah, the US ambassador to Yemen, Matthew Toler, has claimed that, what he called, Houthis are obstructing the implementation of Stockholm agreement.

In the worst misinforming practices by the US ambassador from Aden, the ambassador said in a televised news conference that his country was “deeply disappointed” by what he called the Houthi procrastination in implementing the agreements.

These remarks came supporting to US State Department recent remarks by Mike Pompeo, who claimed last Friday that Ansarullah are blocking Stockholm agreement.

The Amir of the so-called al-Qaeda, Ghalib Zaidi, was, notably, killed in Marib Saturday and dozens of the paid fighters in addition to Al Qaeda ranks that were killed and injured during encountering a military ground creep.

The Ministry of Defense, meantime, confirmed the escape of paid fighters and al Qaeda, leaving the bodies of the killed paid fighters in Melh valley in Sarawah, including the body of Ghaleb Zaidi. Ghaleb Zaidi is one of the commanders of “Al Qaeda” in Yemen and involved in dozens of criminal operations.

A few days ago the Associated Press published a report that revealed the coalition making deals with the so-called al-Qaeda in fighting against the Yemeni army forces.

Mohammed Ali al-Houthi has, for his part, asserted that Yemen “will not be a backyard park for anyone”, referring to Saudi Arabia, as a condition for dialogue and negotiation.

“Peace alone is the real way to solve this conflict,” al-Houthi, head of the Supreme Revolutionary Committee and member of the Supreme Political Council wrote on social media on Wednesday.

Defense Minister, Major General Mohammad Nasser Al-Atefi, also stressed on Thursday that the political leadership is keen on achieving honorable peace. If the aggressors and their mercenaries insist on continuing their arrogance and refusal to implement the peace agreement and stop the aggression, the response will be harsh and painful. “The aggressors will pay the price for their intransigence and the fifth year will be the year of surprises, the year of great victory,” he said.

An official source at the Foreign Ministry ridiculed the message of the so-called Foreign Minister in the pro-aggression government to the United Nation Secretary-General, calling him not to transfer the UN team from Djibouti to Hodeidah.

The source said in a statement quoted by the “Saba” news agency that the message proves the refusal of paid fighters to implement Stockholm agreements through their objection to the meeting, which brought together the salvation government in Sanaa with specialists in the United Nations operational mechanism for investigation.