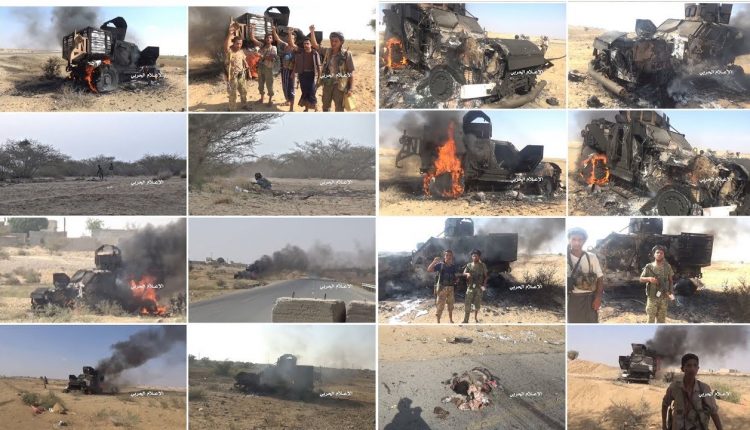 Yemeni forces target the coalition ,causing casualties over its crimes

The Yemeni army forces have carried out many military operations against the Saudi-led coalition, backed by the US, in retaliation for the coalition’s deadly military campaign against their country over four years.

They destroyed 16 machinery and armored vehicles. Their Rocketry Force targeted with ballistic missile, Bader P-1, weapon’s storage of the coalition’s paid fighters. Military Media documented the operation and the scenes will be published later.

He also stated on Thursday that 192 of the coalition’s paid fighters were killed and injured in encountering 5 creeps of them towards Baqem in Asir.

In a post on Facebook, “over 100 of the mercenaries were injured and over 90 were killed, their bodies still there,” he stated.

In the inauguration of the fifth year of steadfastness, Yemeni Armed Forces Spokesman confirmed that more than 20 of the Saudi Army individuals were killed and dozens were injured  in addition to the burning , destroying of 5 machinery and seizing a number of the military equipment in a special military operation by the Yemeni army forces in Jizan.

The spokesman stated in a statement to Saba news agency that the Yemeni army forces waged a special military operation after high monitoring operations, targeting Saudi sites eastern MBC mountain and other sites.

They , in addition, fired a short-range missile, Zilzal, before starting the attack, killing and injuring a number of them, adding that dozens of bodies are still in the sites ad that the enemy did not take them.

The spokesman , on the other hand,, on Saturday, revealed a new statistic by the coalition against Yemen over four years.

He said during a press conference in Sana’a that the coalition launched more than a quarter of a million air strikes and fired more than five hundred thousand missiles, bombs and artillery shell, including 6000 thousand cluster bombs on Yemen. At least 2951 light bombs, 3721 sound bombs and dozens of fragmentation bombs were launched. Furthermore,the naval shelling of the battleships and warships exceeded six thousand rockets.

The spokesman revealed that the Israeli entity participates in the war on Yemen especially in raiding the West Coast. 22 countries and foreign companies are participating in the war against Yemen, in addition to the participation of tens of thousands of local and foreign paid fighters, adding that Yemen has accurate details on how each country is involved and will be disclosed in a timely manner. He stressed that the US role in the war against Yemen is clear as a leading and directing role, and that Israeli participation does not need more evidence than the Israeli leaders and the media admitting.

Brigadier Sare’e said that the coalition committed the most brutal massacres and destroyed the infrastructure to achieve its goals in Yemen, pointing out that the raids and bombing of the coalitio have killed tens of thousands citizens, including women and children.

Sudanese Must Protect Their Sons from Being Dragged into an Illegal War in Yemen: Houthi Official Said