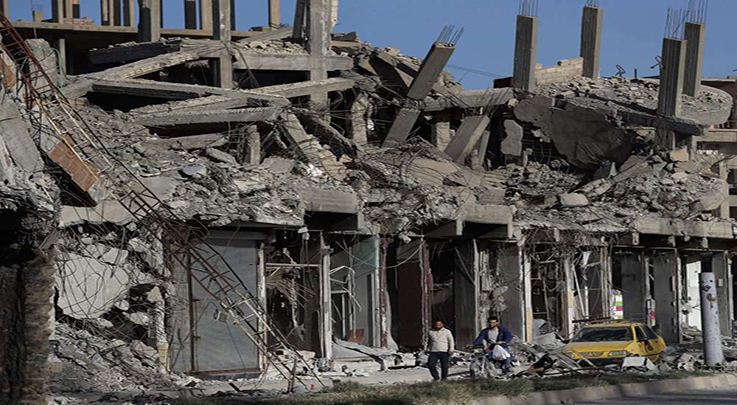 The so-called US-led military coalition,  purportedly fight the Daesh terrorists in Syria, has killed more than 1,600 civilians in the country’s northern city of Raqqa during months of airstrikes, two UK-based rights groups said.

Amnesty International (AI) and Airwars accused in a joint statement on Thursday the US-led coalition of indiscriminate use of artillery force in densely populated areas, saying that the new toll figure was obtained after the “most comprehensive investigation into civilian deaths in a modern conflict,” AP reported Friday.

This is while the US-led military force claimed last month that only 1,257 civilians were killed in their bombardments of Daesh targets over four years in both Syria and Iraq.

“We continue to employ thorough and deliberate targeting and strike processes to minimize the impact of our operations on civilian populations and infrastructure,” the coalition stated.

The UN estimates that more than 10,000 buildings were destroyed or 80 percent of the city.

“Coalition forces razed Raqqa, but they cannot erase the truth. Amnesty International and Airwars call upon the Coalition forces to end their denial about the shocking scale of civilian deaths and destruction caused by their offensive in Raqqa,” the two groups said.

In June of last year, another AI report estimated that hundreds of civilians were killed in Raqqa, while the Airwars emphasized that it has evidence of 1,400 fatalities.

The statement said AI’s innovative “Strike Trackers” project also identified when each of the more than 11,000 destroyed buildings in Raqqa was hit. More than 3,000 digital activists in 124 countries took part, analyzing a total of more than 2 million satellite image frames, it added.

“The Coalition needs to fully investigate what went wrong at Raqqa and learn from those lessons, to prevent inflicting such tremendous suffering on civilians caught in future military operations,” Airwars Director Chris Woods further underlined.

Report: Is the UAE Gearing Up to Annex Yemen’s Socotra Island?