YemenExtra obtained a document of the “Ben Krit” in which the Director General of the port asked to prevent entry of the solar system through the port, only after taking permission from him.

By means of these decisions, Ben-Krit aims to pressure traders and alienate them from the province as one of the main objectives that the forces of the coalition seek to subjugate the tribes and the skilled liberals who reject the coalition’s presence in the region.

In the context of directing the forces of the coalition to prevent the entry of solar panels to the province of Abyan.

Eyewitnesses from the province told YemenExtra that the flag point belonging to the paid fighters of the security belt of the UAE located between the provinces of Aden and Abyan prevented the entry of the plates by the leaders of the coalition in Aden . 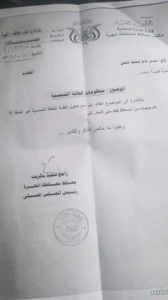 The Disgraceful Case for Increasing U.S. Support for the War on Yemen