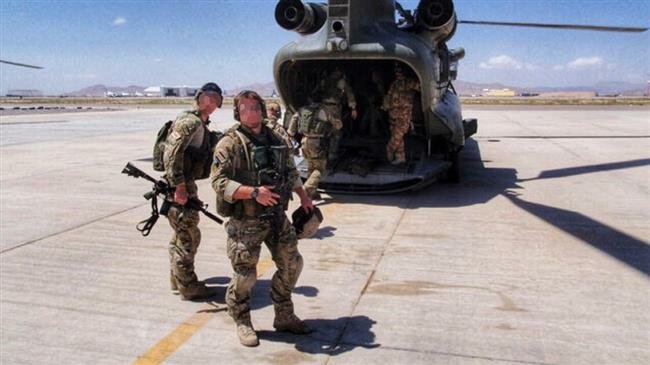 An unconfirmed report shows Britain has secretly sent troops to the Persian Gulf to help US forces in the region to counter an alleged threat from Iran.

The Sunday Express said that British special forces had joined US strike group in the Persian Gulf as part of a top secret mission to allegedly protect merchant ships against possible threats that the Washington and its allies insist are coming from Iran.
The report said special boat service (SBS) forces were now with the UK registered oil tankers transiting through the Strait of Hormuz to the south of the Persian Gulf waters.
It said the SBS has been tasked to monitor Iranian military activity around the island of Qeshm, where Iran normally stations its naval gunboats.
The report added that Royal Navy Merlin helicopters which are not allowed to fly above the Strait of Hormuz will airlift the SBS forces once they enter the Gulf of Oman.
The report comes amid heightened tensions between Iran and the United States in the Persian Gulf region, where Washington has sent an aircraft carrier and B-52 long-range bombers in a show of force against Iran.

The tensions intensified after Iran announced earlier this month that it will suspend parts of its commitments under an international nuclear agreement which has suffered as a result of US withdrawal last year.

Britain has publicly refrained from taking side in the conflict although authorities in London have on several occasions endorsed Washington’s anti-Iran rhetoric.

British foreign minister Jeremy hunt said earlier this week that his country “shared the same assessment of the heightened threat posed by Iran.”
The deployment of US special forces to the Persian Gulf comes following a series of attacks on oil tankers off the coast of United Arab Emirates.
Iran has warned that such sabotage operation may be part of a general ploy to target Iran amid the increasing regional tensions.
Several senior American politicians have warned that Iran hawks in Trump’s team are cooking up intelligence in order to convince Trump that Iran is indeed a threat, putting Washington on the same path that lead to the ill-fated invasion of Iraq back in 2003.