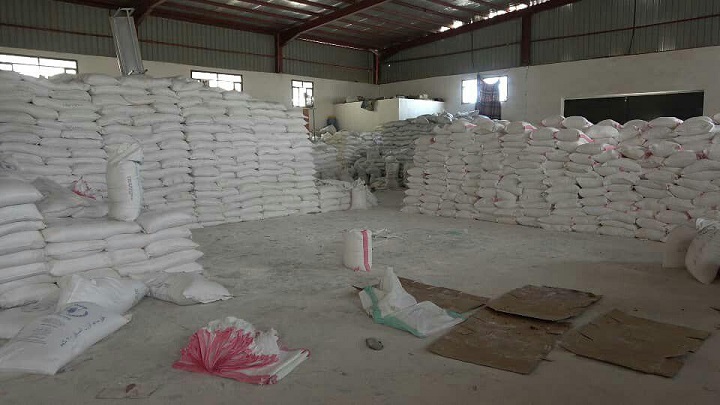 The real face of the World Food Program

The Organization of National Humanitarian Affairs and Relief held a press conference in the capital Sana’a. The Organization responded to the fallacies of the Director of the World Food Program, David Beasley, during his briefing to the Security Council, in which he tried to cover the corruption of shipments of food and aid to Yemen.

The head of The Organization of National Humanitarian Affairs and Relief, Abdulmohsen Al-Tawoos, stressed at the press conference, which highlighted the latest developments, to inform the public about the nature of the problems with a number of international organizations and the continued distribution of unsafe food.

The head of the Negotiating Delegation, Mohamed Abdelsalam, said that “there is no objection to the work of the organizations in Yemen, provided that its work is humanitarian, free from political exploitation, security recruitment and collecting information and data for the benefit of the countries of aggression.” He reiterated his call to organizations and organizations working in Yemen to abide by humanitarian action alone.

Abdulsalam said in his post that organizations in Yemen are working with international intelligence agencies. These organizations sell their information, data and coordinates to the countries of the coalition under the title of humanitarian action. He pointed out that “the suspicious organizations do not know that our Yemeni people are fully aware of their tricks and no longer deceived by crocodile tears and the demonstration of humanity.”

Yemen Standardization, Metrology and Quality Control Organization rejected the entry of a large quantity of wheat flour, belonged to the World Food Program, because of its contravention the approved standard specifications

The Organization explained in a statement that the quantity which it rejected to be entered through Hodeidah port, estimated at 163 thousand and 892 bags of flour, after the tests showed the presence of insects in it. The Organization pointed that they were WFP consignments.

In a new World Food Program scandal in Yemen, the results of a field visit by the National Authority for the Management and Coordination of Humanitarian Affairs and Disaster Recovery has showed that WFP is distributing rotten food that contained insect.

According to a statement issued by the National Authority, “on the basis of a report on the presence of spoiled foodstuffs at the distributing points of the World Food Program, in Mu’tasim school and Al-Shami School in the capital Sana’a, the Commission formed a committee to investigate these centers. We found out that there are small insects in legumes at the World Food Centers in these two schools.

The National Authority for the Management and Coordination of Humanitarian Affairs and Disaster Recovery was surprised by the statement made by the Executive Director of the World Food Program, which accuses government agencies of selling relief materials or directing them to non-beneficiaries.

The agency said in a statement that the amount of food needed is much greater than the amount provided, indicating that an agreement has been signed between the National Authority for the Management and Coordination of Humanitarian Affairs and the World Food Program, which includes all procedures for the arrival of aid to beneficiaries.

Yemeni citizens protest against the coalition in southern Yemen