It seems that the World Bank finally decided to engage in the chaos created by the Saudi-led coalition, backed by the US, in Yemen. The World Bank has stepped up its activities in the Yemeni occupied territories over the past two days and has provided a $ 400 million grant to the pro-coalition government, while the coalition media spoke of the World Bank’s intention to open a permanent office in Aden, southern Yemen, under the control of UAE.

Recent World Bank moves have raised questions among observers about the Bank’s dubious objectives in Aden. How can the World Bank ignore all the corruption and economic failures of the pro-coalition government, as the UN Committee of Experts’ report described the level of corruption in the pro-coalition government to the point of “threatening the foundations of social stability, measures must be taken to curb that corruption.” This makes the deal with the “Hadi” government a risk, can not be made by any party, especially the World Bank.

Beside the corruption issue in “Hadi” government, there is also the political and social unrest issue in Yemen during war, which makes the fate of any grants or loans, threatened with loss. The Salvation Government in Sana’a warned in July last year to deal with the pro-coalition government in any grant agreements or loans and stressed that the Yemeni people do not bear the responsibility of any financial agreements with it.

The Supreme Political Council, on Monday, presented a unilateral initiative on the governments employees salary issue, directing the government to establish a special account in the branch of the Central Bank of Yemen in the province of Hodeidah.

The initiative stated that all revenues of the three ports (Hodeidah, Ras Issa and Salif) will be used toward the Special Payroll Account for all employees, holding the pro-coalition party responsible for evading the Stockholm’s Agreement, and pointeing out that the pro-coalition party has to bear all the consequences that will result from the continued imposition of unjust economic restrictions.

Head of the Supreme Revolutionary Committee, Mohammad Ali Al-Houthi, called on the coalition and its government in Yemen to freeze the printed currency, hand over revenues to restrict them to the bank from all outlets and not loot them, and to pay salaries unconditionally in accordance with the mechanism provided through the United Nations. Also to supply all the country’s resources from foreign currencies to the Central Bank, the most important of which is oil sales, and to work carefully on covering the import invoice for basic materials, resources in hard currency, grants and aid on condition that coverage is covered without restrictions such as cash supply to Aden.

The Supreme Political holds the pro-coalition government and the coalition responsible for all the consequences of transferring the Central Bank and ‎manipulation of the national currency by the printing more currency without cover to maintain its value.

The Norwegian Refugee Council (NRC) said soaring food prices were pushing many people closer to the brink in a country where millions are already close to famine.

“The spiralling economy compounds the devastating humanitarian crisis in which Yemenis are facing with extreme violence, widespread disease, displacement and hunger. Over 8 million people are on the brink of famine, placing them at greater risk of disease in what has become the world’s largest ever cholera outbreak,” the council said in a press release.

Undersecretary of the Finance Ministry, Ahmed Hajar called to form a committee to address the crisis resulting from printing huge amounts of local currency by the coalition. Haiar said on a telephone call with Almasirah TV that pumping the local currency without foreign cover doubles the crisis, stressing that manipulation of the local economy is one of the cards of the coalition. 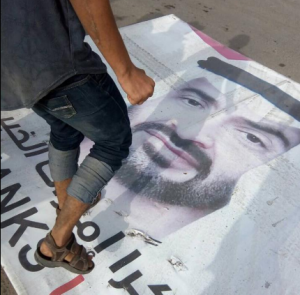 Angry protesters ripped pictures of the leaders of countries of the coalition in many Yemeni cities to protest against the deteriorating Economic Conditions, asking the coalition to leave the country.