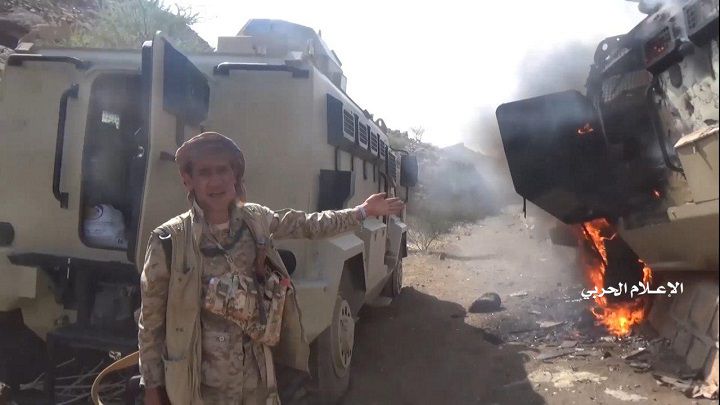 Military media of the Yemeni army have on Sunday released video footage showing full scenes of the second phase of the Victory from Allah, a series of operations carried out by the Yemeni army forces in Najran region, southern Saudi Arabia.

The scenes show the overnight battle fought by the Yemeni forces against the Saudi-led coalition forces and paid fighters.

The footage also indicated that dozens of US and Canadian armoured vehicles and military pickups were damaged and seized in ambushes by the Yemeni army’s engineering unit.

The scenes furthermore show the Yemeni Army units advancing and storming the sites of the mercenaries. Dozens of Saudi-led paid fighters were seen fleeing with their vehicles and armoured cars.

Military Media released, earlier this month, scenes of that included more details of the 1st phase of the victory from Allah Operation, carried out by the Yemeni army forces in Najran front.

The scenes revealed new details of dozens US and Canadian armored vehicles and military vehicles while they were seized in ambushes by the army’s Engineering Unit. Dozens of these armored were burned and others were pulled out of the battleground to be used in the future against the US-Saudi forces. The scenes highlighted the steadfastness of the Yemeni fighter in front of the armored vehicles and dozens of airstrikes.

Extensive scenes showed the progress of Yemeni army units while storming the sites of the paid fighters of the coalition and chasing hundreds of Saudi paid fighters as they flee with their vehicles and armored vehicles. The scenes also showed the army’s ethical treatment of hundreds of the Saudi war prisoners and paid fighters who surrendered.

Many Western studies centers agree that the border war on Saudi territory by Yemeni forces will eventually force the kingdom to change course in Yemen. Since 2016, almost a year after the start of Yemeni ground operations at the border, the Saudi regime has become increasingly ridiculed for its inability to stop Yemeni attacks, while Yemeni ground attacks have been widening deeper into the kingdom’s southern territory.

Although the United States and Britain have sent troops directly to counter Yemeni ground attacks, this has added nothing to the difficult situation Saudi Arabia faces as a result of continued ground attacks by Yemeni forces. For four years, the kingdom’s regime has been forced to make many concessions that have been taboo since the kingdom was created 70 years ago, in a bid to lend a little coherence to mounting Yemeni attacks.