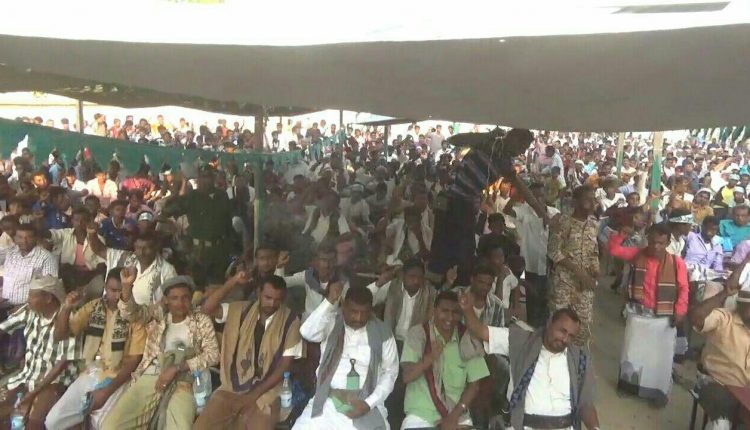 A mass rally was held on Monday by tribes and sheikhs of Marib province to mark Prophet’s birthday.At the rally, the participants affirmed the readiness to participate in this occasion that holds in the capital Sanaa.

They called on the Yemeni tribes to move to the battle fronts to back the Yemeni army for confronting the Saudi-led aggression coalition and its mercenaries.

Tribes and sheikhs of Hodeidah province on Monday organized several cultural activities to mark the Prophet’s birthday “Mohammed peace be upon him.”

Acting governor of Hodeidah Mohammad Qahim affirmed that the commemoration of the prophet’s birthday came coinciding with great triumphs and achievements made by the Yemeni army and popular forces against the Saudi-led aggression coalition in the battle fronts.

Information Minister Daifallah al-Shami on Monday stressed the importance of celebrating the anniversary of birth of Prophet Mohammed peace be upon him (pbuh), who had brought the nation out of darkness into light.

During the ceremony, organized by Ministry of Information and its subsidiary media institutions, al-Shami emphasized the important role of media in transferring the manifestations of celebration and joy of this occasion, especially the central ceremonies on the 12th of Rabie I, 1441 A.H.

In March 2015, Saudi Arabia and a coalition of its regional allies — mainly the united Arab Emirates and Jordan — started  a war against Yemen with the declared aim of crushing the Houthi Ansarullah movement, who had taken over from the staunch Riyadh ally and fugitive former president Abd Rabbuh Mansur Hadi, while also seeking to secure the Saudi border with its southern neighbor. Three years and over 600,000 dead and injured Yemeni people and  prevented the patients from travelling abroad for treatment and blocked the entry of medicine into the war-torn country, the war has yielded little to that effect.