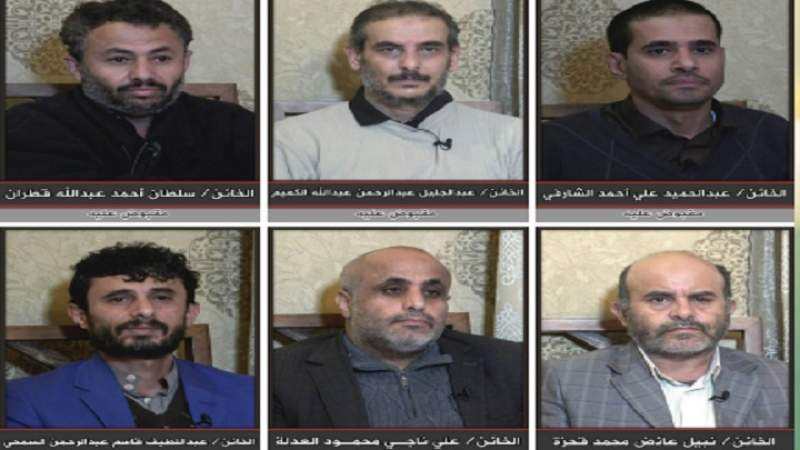 The Yemeni Ministry of Interior recently exposed traitors cooperating with the Saudi-led coalition in newly distributed scenes. According to Nabeel Ali Ahmed Al-Qars Al-Kumaim’s confession, the cell conducted sabotage activities in the southern part of the capital in the following districts (Al-Sabaeen, Al-Wahda, Al-Safia, Azal, Al-Tahrir).

The following are the names of the cell’s members seen in the uncovered footage:

The cell’s work focused on the security, educational and media aspects by submitting reports to the main cell present in Saudi Arabia, consisting of the following traitors:-

The fugitive from justice/ Muhammad Abdullah al-Qawsi, “the leader of the cells”.

The fugitive from justice / Faiz Muhammad Rajeh Ghallab, “the financial and administrative official of the cells.”

The fugitive from justice / Najeeb Abdullah Muhammad Ghallab, “responsible for the media orientation of cells.”

The fugitive from justice / Khaled Hussein Ali Hassan Al-Ashbat, “responsible for the educational orientation of cells.

Among the confessions of the traitors recorded is the nature of those subversive activities which they practiced. Accordingly, reports summarizing these activities were submitted to the main cell for the enemy to benefit from.

Earlier, the Ministry of Interior revealed that the security services, after the investigations, concluded that there are two cells, one of which is managed by Saudi intelligence and the other operated by Emirati intelligence. The two are responsible for carrying out acts of chaos and sabotage activities to harm the Republic of Yemen’s military, political, diplomatic and economic status, paralyze the work of state institutions and disrupt security and stability.

Moreover, after the security services obtained a warrant for arrest and inspection by the Public Prosecution in accordance with the law to initiate the procedures, preliminary results concluded that the first cell is run by Saudi intelligence. The cell was under the supervision of a group of Saudi officers, including Major General Fahd bin Zaid Al-Motairi, Brigadier Falah bin Muhammad al-Shahrani and others.

The fugitive from justice, Muhammad Abdullah Al-Qawsi, the former Minister of Interior, was also part of this cell. He managed gathering and training cell members and direct implementation of the activities, which were planned by Saudi intelligence and the main cell elements in the city of Shororah.

Expenditures Without Limits and a Task Without an End: UN Envoy to Yemen