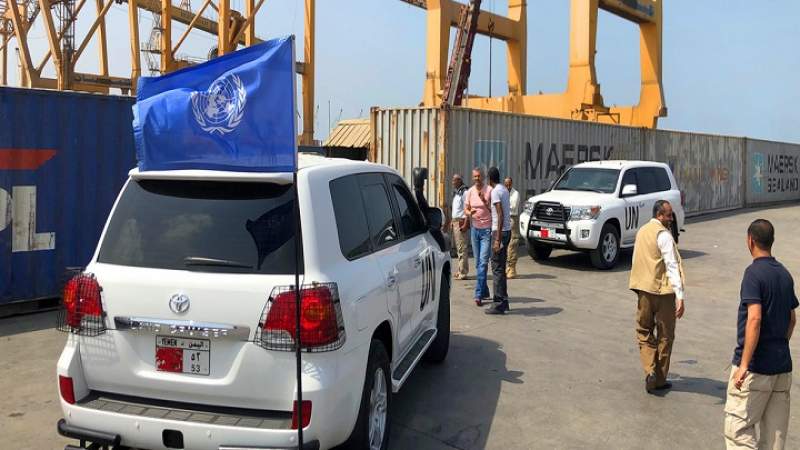 The UN teams continue to verify the unilateral redeployment phase implemented by the Yemeni army and popular committees from three ports in Hodeidah on May 11, 2019. They implement their work in accordance with the weekly program submitted by the mission’s coordination and relations mechanism.

Today Sunday happens to mark the 134 time the UN team verifies the unilateral redeployment phase from the ports.

The United Nations and the Security Council have praised the national team’s implementation of all the obligations in the first phase of the Stockholm Agreement. On the other hand, the aggressive countries still impose their mercenaries to evade the implementation of the benefits set by the Sweden agreement. The US-backed coalition’s countries also encourage their mercenaries to commit hostilities attempting to undermine the agreement and thwart peace efforts.

Furthermore, mercenaries of the Saudi American aggression have been using this method ever since the approval of the two phases of redeployment, which was reached during the fourth joint meeting held in the city of Hodeidah during the period of 16-17 February 2019 until the 15th of July 2019. The meeting consisted of a  farewell for the head of the United Nations Mission in Support of the Hodeidah Agreement, former chairman of the Joint Redeployment Coordination Committee, General “Michael Lollisgaard”.

According to the Yemeni army and the people’s committees, the first phase of the redeployment has been approved by their side for the purpose of the smooth flow of food, pharmaceutical and petroleum products to the ports of Hodeidah. The easy import of such life basics is necessary in order to meet the needs of citizens and alleviate the suffering that burdened the Yemeni people, resulting from the siege imposed by the aggression’s countries.

Since the Saudi-led coalition chooses not to cooperate, the United Nations should deal with the aggression using a new policy that enforces respect for the Hodeidah agreement and an end to the siege on ports to ensure a sustainable flow of fuel, food, medicine, goods, and aid ships.

Yemeni Drones: From the Moment of Revelation Until the Latest Operations