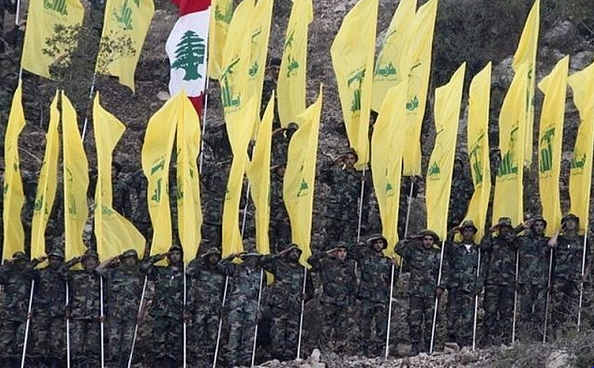 UN, US Reiterate Futile Call for Disarming Hezbollah: Is It the Prerequisite for Any IMF Aid to Lebanon?

UN, US Reiterate Futile Call for Disarming Hezbollah: Is It the Prerequisite for Any IMF Aid to Lebanon?
As the Lebanese government decided to start negotiations with the International Monetary Fund in order to set a program that could help Lebanon overcome its financial and socioeconomic crisis, observers starting questioning the political price that ought in return for the IMF aid.

In Lebanon, all the political parties approved the government initiative as the economic crisis has been pressing all the Lebanese whose loving conditions have been sharply deteriorating; however, Hezbollah emphasized that any political price for IMF aid would be categorically rejected.

So far, the IMF has asked Lebanon to conduct economic and administrative reforms which help it cope with the crisis, including slashing the public labor force and addressing the problem of power shortage which wastes annually around $2bn. In this concern, all the Lebanese parties would not reject such conditions which would really prove efficient when supported by the IMF financial aid.

The international community, led by the US administration, has always pressed the Lebanese authorities to disarm Hezbollah, avoid any direct ties with Syria and align with the axis of normalizing relations with the Israeli enemy.

In this regard, US Ambassador to the UN Kelly Craft said on Wednesday, “the UN Security Council must ensure that armed groups in Lebanon such as Hezbollah are disarmed and that the role of the UN Interim Force in Lebanon (UNIFIL) is strengthened so that it can properly investigate the ‘paramilitary group’s violations’.”

The US is “deeply concerned about the continued operation of armed militias operating outside of government control, as well as Iran’s and Syria’s transfers of weaponry to Hezbollah and other non-state actors in Lebanon,” Craft said.

Further, the UN Secretary-General Antonio Guterres said that the Lebanese government and the army should take all possible steps to prevent Hezbollah and other armed groups from acquiring weapons.

Knowing that Guterres had earlier proposed an international ceasefire for the world to focus on the fight against the coronavirus, would this call serve the ceasefire?

Do these remarks come in the context of the political price that Lebanon has to pay to the international community in return for the IMF financial aid?

The answer to this question is divided into two parts: local and international.

Locally, the Lebanese government may never involve the country in the quagmire of internal conflicts and deprive the nation from the military shield provided by the Resistance against the Israeli aggression.

Internationally, it is undisputed that Washington and its allies would seize any chance to disarm the Lebanese Resistance which has frustrated all its schemes in Lebanon and the Middle East.

Accordingly, the international community will meet a deadlock if it sets a political price, but will Lebanon in this case lose the IMF aid?