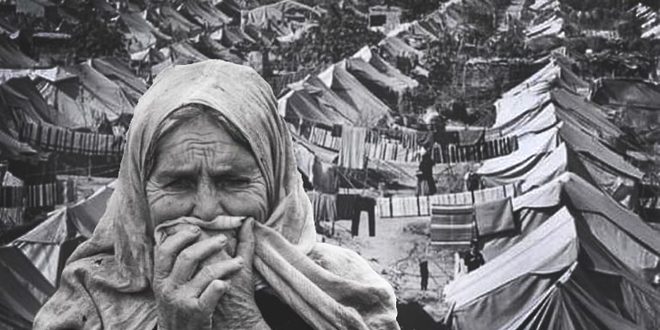 The international community has been keeping silent towards the atrocious crimes of the Israeli occupation forces against the Palestinian people.

The United Nations also failed to implement its resolutions pertaining to the Palestine cause, especially those related to the Palestinians right to return to their indigenous homeland and the establishment of an independent Palestinian state with al-Quds (Jerusalem) as its capital.

The makers of the Nakba wanted Palestine to be a land without people for a people without land. To achieve this end, the Zionist entity perpetrated the ugliest crimes and atrocities to liquidate the Palestine cause. However, the Palestinians’ strong will foiled all the conspiracies through adherence to their lands and rights, Deputy Chairman of the Palestinian Refugees Department Ahmad Abu Hawla told SANA reporter.

He added that a campaign under the title of “We will return to Palestine” was launched on the social media outlets to affirm the Palestinian people’s commitment to all their inalienable rights.

Director of the International al-Quds Centre Hasan Khater affirmed that the forthcoming Palestinian generations will never forget the savage massacres their fathers and forefathers were subjected to at the hands of the Zionist gangs.

He emphasized the commitment of all Palestinians to their repatriation right.

The conspiracies against the Palestinians have been successive since the Balfour Declaration in 1917.

The most recent chapter of the conspiracy against the Palestine cause was the Israeli occupation authorities’ announcement regarding their intention to annex parts of the West Bank supported by the Trump administration which has been offering gifts to Israel over the past years.

In 2018, Trump announced the transfer of the US embassy from Tel Aviv to occupied al-Quds declaring it the eternal capital of “Israel” ignoring all UN resolutions and conventions.

The Palestinian National Council has demanded all world governments to express solidarity with the Palestinian people and their legitimate resistance to restore their inalienable rights to self-determination and the establishment of an independent Palestinian state with l-Quds as its capital, calling on world parliaments to work with their governments to impose sanctions on “Israel” to make it end its occupation of the Palestinian territories and prevent it from annexing parts of the West Bank.

UN, US Reiterate Futile Call for Disarming Hezbollah: Is It the Prerequisite for Any IMF Aid to Lebanon?