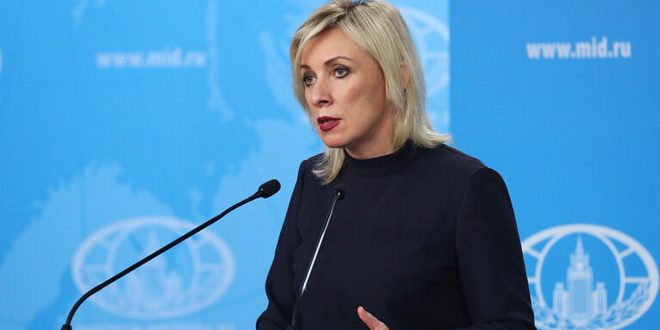 Moscow, Russian Foreign Ministry affirmed on Thursday that countries of the west and the Organization for the Prohibition of chemical Weapons (OPCW) fear from discussing the activity, goals and missions of the so-called “Investigation and Identification Team” whose conclusions, which are hostile to Syria, are made in an unprecedented way.

“It was supposed that a session for the UN Security council would be held on May 12th through Video Conference about Syria with the participation of the Director General of the Technical Secretariat of the Organization, and the western counties had the intention to continue imposing their fabricated conclusions included in the first report of the Investigation team formed by OPCW,” Spokeswoman of the Russian Foreign Ministry, Maria Zakharova, said in a press conference through video.

She added that Russia wants to have accurate clarifications from the OPCW secretariat about all suspected conditions of collecting and storing the samples until the minute of submitting them to the Investigation team related to the use of chemical weapon in Syria.

Zakharova called on OPCW to show the actual reasons, not the fabricated ones, behind the technical secretariat’s abstention from accepting Syria’s invitation to send experts to Ltamenah town, where it was claimed that the chemical weapon was used there in March 2017.

Russia and China boycotted a closed-door meeting on Tuesday through video at the UN Security Council about the western claims of the use of chemical weapons in Syria.

New leaks obtained by “the Grey Zone “independent journalism stressed that the experts who have contributed to preparing and editing a report which was released on April 8th, 2020, by the so-called “the Investigation and Identification team” had said that the report was politicized, misleading and incomplete.