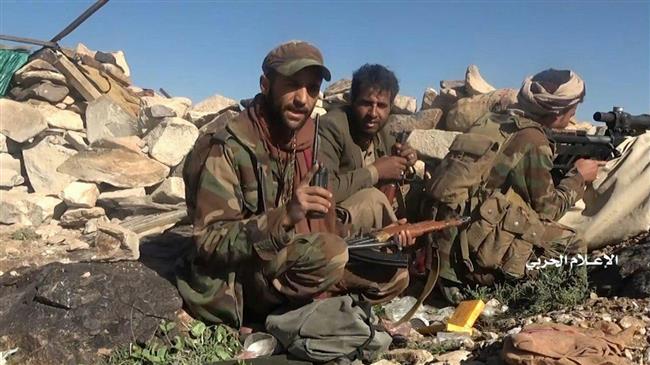 The media bureau of Yemen’s Operations Command Center, in a series of posts published on its official Twitter page, announced that the Yemeni troops and fighters from the Houthi Ansarullah movement launched their attack in Souq al-Qaniyeh area, which lies in the eastern countryside of the province, and succeeded after several hours of heavy combat.

The Yemeni army troopers and Popular Committees fighters also recovered assault rifles as well as munitions from the pro-Hadi militiamen, destroyed a number of their vehicles and set fire to several military fortifications.

Moreover, Saudi-led military aircraft carried out three airstrikes against a customs office in the Harad district, and another two on an area in the Midi district of Yemen’s northwestern province of Hajjah early on Friday.

There were no immediate reports of casualties and the extent of damage caused.

Separately, Saudi fighter jets pounded areas in the Majzar and Medghal districts of Yemen’s central province of Ma’rib. No words about the extent of damage and possible casualties were immediately reported.

Saudi Arabia and a number of its regional allies launched the devastating war on Yemen in March 2015 in order to bring Hadi back to power and crush the popular Houthi Ansarullah movement.

At least 80 percent of the 28 million-strong population is also reliant on aid to survive in what the United Nations has called the world’s worst humanitarian crisis.