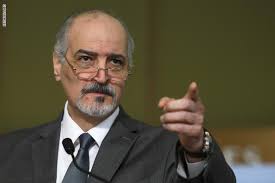 Al-Jaafari: Any foreign military presence on Syrian territories without consent of the government is an aggression and occupation

New York, Syria’s permanent representative to the UN, Dr. Bashar al-Jaafari, reiterated that any presence of foreign military forces on the Syrian territories, without the consent of the government is an aggression and occupation.

“Syria will not abandon its right in defending its land and resources, and continuing the fight against terrorism as well as liberating its occupied lands whether the occupier was an American, Turkish, Israeli, or from the terrorist originations,’ al-Jaafari said during a UN Security council session via video about the situation in Syria.

He added that the Turkish regime continues supporting and sponsoring the terrorist organizations affiliated to it which are active in different regions in northern Syria, in a flagrant violation of its obligations according to the international law, Sochi, Astana and Moscow understandings.

Al-Jaafari went on to say that the US occupation forces also began to establish a new military base in Deir Ezzor countryside in order to tighten its grip on the Syrian oil wells and loot the Syrian people’s resources.

“The last period also witnessed Israeli aggressions on Syria from over the occupied Syrian Golan lands and neighboring countries,” al-Jaafari said, affirming that these hostile practices, which represent a flagrant violation of the international law, are just parts of the hostile practices to back the terrorist organizations and the agent separatist militias to prolong the span of the Syrian crisis.

He affirmed that Syria encounters an unprecedented terrorism, sponsored by UN member countries in order to gain political concessions that suit their agendas of interfering in sovereign affairs of regional countries.