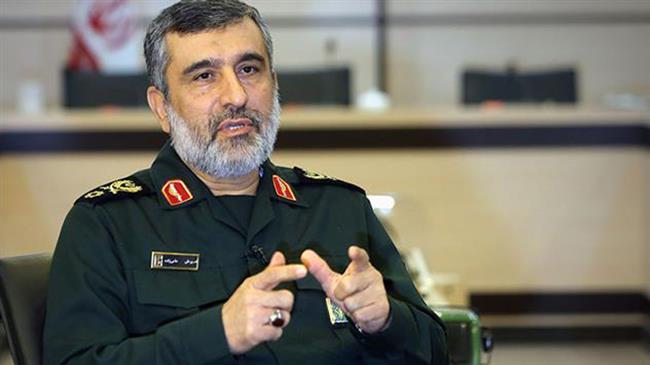 Iran has reached the highest level of defense preparedness since the victory of the 1979 Islamic Revolution, says a senior commander of the Islamic Revolution Guards Corps (IRGC), emphasizing that there is nothing for the Iranian people to worry about in this regard.

“Our defense preparedness is currently at the highest level since the victory of the Islamic Revolution and our people should have no concerns in this regard,” Commander of the IRGC Aerospace Division Brigadier General Amir Ali Hajizadeh said on Sunday.

“Iran – thank God – is currently powerful [in the defense sector] and no one should have any worries in this regard. It is the enemy who must be concerned,” Hajizadeh added.

He noted that from his viewpoint, economy is the main front in which the Iranian nation is facing the biggest problem, calling on the Iranian people and authorities to focus their efforts on solving the economic problems.

Leader of the Islamic Revolution Ayatollah Seyyed Ali Khamenei has called for a further strengthening of the country’s defense power to confront threats and avoid any possible outbreak of war.

Iran has managed to “paralyze” its enemies, and has developed its own “sophisticated” means of defense in response to the enemy’s use of increasingly advanced measures against Iran, the Leader told a group of Iranian Air Force commanders and personnel in Tehran in February.

Iran has made major breakthroughs in its defense sector and attained self-sufficiency in producing military equipment and hardware despite facing US sanctions and Western economic pressure.

The Islamic Republic says its military power is solely for defensive purposes against enemy threats.

Zionists always accuse their opponents of wrongdoings they do: American scholar