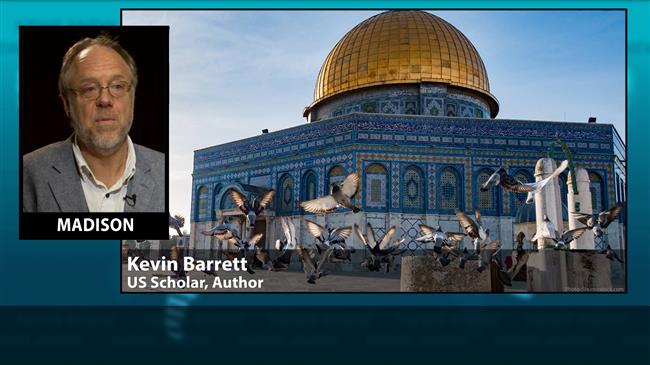 Zionists always accuse their opponents of wrongdoings they do: American scholar

Zionists always accuse their opponents of the wrongdoings that they do themselves, an American scholar has said.

Kevin Barrett, an author, journalist and radio host with a Ph.D. in Islamic and Arabic Studies, made the remarks in an interview with Press TV on Friday.

Iran’s foreign minister has downplayed a recent spate of propaganda by Western media about a poster that appeared on the website of Leader of the Islamic Revolution Ayatollah Seyyed Ali Khamenei proposing “referendum” as the best way to end Israel’s occupation of Palestinian territories and the final solution to the issue of Palestine.

Since the publication of the said poster on Ayatollah Khamenei’s website on Wednesday, some Zionist-sponsored international media have been trying to draw an analogy between the term “the final solution” on that poster and the Nazi idea of extermination of Jews during World War II.

Some Western and Zionist officials also moved fast to come up with such baseless charges, most prominent among them being US Secretary of State Mike Pompeo and Israeli Prime Minister Benjamin Netanyahu, who went as far as threatening Iran with destruction.

Following is the text of Barrett’s interview with Press TV:

Iran’s foreign minister Zarif has responded to attacks from Benjamin Netanyahu, Mike Pompeo, and the Zionist-dominated section of the Western media on the Supreme Leader of Iran’s office, which put out a poster ‘Palestine Will Be Free’ with its sub-heading the ‘Final Solution: Resistance until the Referendum.’

This poster is a very beautiful image showing the Palestinian people reclaiming the Masjid Al-Aqsa, the Al-Aqsa Mosque, which is the oldest and greatest Islamic architectural monument, symbolizing the presence of Islam in Palestine, and the fact that Muslims administered the Holy Land on behalf of all monotheists essentially ever since Islam existed.

So this beautiful image of the Liberation of Palestine was attacked by people like Pompeo and Netanyahu and their echo chamber Zionists from media as if it were calling for the mass murder of Jews. Apparently, the solution, the final solution, always has to refer to the Hitler-era ethnic cleansing of Jews from Europe under the Nazis.

I suppose they’ve trademarked that, just like they trademarked the terms Holocaust (TM). And they probably would like to trademark the term genocide, although there have been thousands, if not millions of genocides throughout human history.

But if they want to trademark ‘final solution,’ saying that nobody in any language from any part of the world can come up with a final or permanent solution to any problem, because this expression was once used in a way that they find very offensive, that’s insane.

And so it’s quite ironic here that the Zionists, who are in fact the ones who are most loudly protesting about this Iranian poster, are in fact the world’s worst genocide perpetrators. They’ve been perpetrating genocide in Palestine since 1948.

And it does qualify: The Zionist genocide of Palestine is clearly a case of genocide under international law. Cases were made in great detail by international law. Professor Francis Boyle at the University of Illinois, and using those arguments, Israel was actually convicted of genocide at the Kuala Lumpur War Crimes Tribunal a few years ago.

So here we have a case of the worst criminals calling law enforcement that name, because they want to continue their genocide. This is a typical giant Zionist method. They always accuse their opponents of doing exactly the things that they are doing themselves.