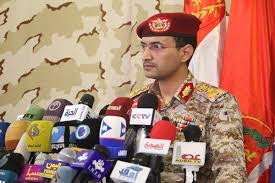 In the statement issued on Sunday, Brigadier General Sare’e said that the coalition forces have launched 48 airstrikes on several Yemen governorates during the past hours.

The Saudi/UAE warplanes also launched 15 airstrikes on Haradh and Abbs districts of Hajjah governorate while 18 other airstrikes targeted  Maran, al-Malahit and Baqim districts in Saada governroate, leaving a number of killed and wounded casualties.

Meanwhile, the spokesman of the armed forces confirmed that this ongoing aerial escalation will have serious consequences for the aggressive forces, and they must bear the consequences.