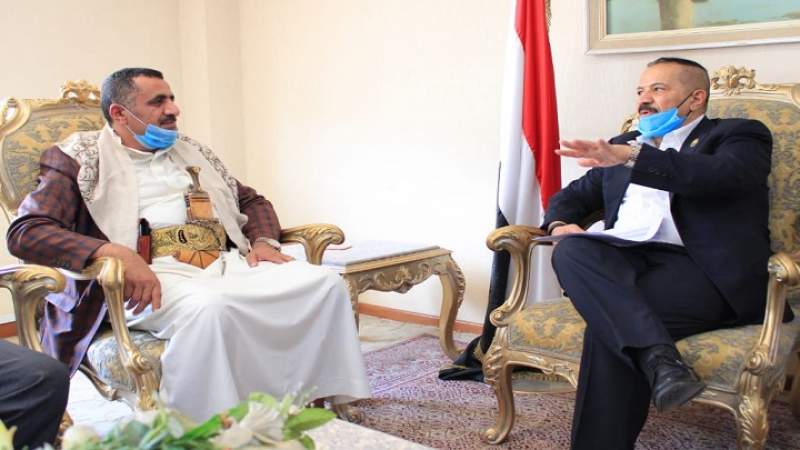 The Minister of Foreign Affairs, Hisham Sharaf Abdullah, discussed with the Minister of Oil and Minerals, Ahmed Abdullah Daris, the implications of the continued siege by the Saudi coalition of aggression and its imprisonment of oil and gas derivatives tankers.

The meeting discussed the aspects related to the continuation of Saudi-UAE aggression in practicing the policy of collective punishment against the Yemeni people by preventing the entry of oil and gas tankers to the port of Hodeidah, which is against humanity.

Moreover, the prevention of oil tankers from entering into Yemen has doubled the repercussions of the Covid-19 pandemic. People of Yemen have been suffering from such crimes for more than five years since the beginning of the Saudi war and its blockade on Yemen.

In the meeting, the Foreign Minister made it clear that the continuation of the arbitrary measures by the coalition of aggression confirms to the whole world the truth about the goals of the aggression aimed at destroying the capabilities of the Yemeni people and breaking their steadfastness in confronting the Saudi-UAE aggression.

“It is ironic that the talk continues from time to time about holding consultations between the Yemeni parties to reach a just political settlement in light of the escalation by the aggression, its siege, and the continuation of reprisals against the Yemeni people on a daily basis,” minister Sharaf said.

Minister Sharaf pointed out that any efforts, dialogue or consultations regarding peace in Yemen must be accompanied by taking a number of steps that aid Yemeni citizens, and in the forefront: paying the salaries of all state employees and ensuring the flow and entry of vessels loaded with oil and gas derivatives and food and commercial goods through the port of Hodeidah without any obstructions, and lifting the siege imposed on Sanaa International Airport in front of commercial and civil air flights.

For his part, the Minister of Oil and Minerals pointed out that the continued detention of the tankers off the port of Hodeidah is worsening the humanitarian situation in Yemen .. pointing out that the goal of the Saudi-led aggression and its mercenaries behind this, is to increase the suffering of the Yemeni people.

Moreover, the minister explained that during when the world witnessed a significant decline in oil prices, the aggression countries increased their blockade and prevented the entry of ships loaded with oil derivatives into the port of Hodeidah; thus, the Yemeni civilians cant benefit from international low prices and doubling their sufferings.

The Ministers of Foreign Affairs, Oil and Minerals, stressed the importance of implementing a diplomatic campaign to expose the crimes committed by the US-backed Saudi-led aggression of coalition and inviting the Special Envoy of the United Nations Secretary-General to Yemen Martin Griffiths and the countries sponsoring the political settlement process in Yemen to support the efforts of the Salvation Government that aims at alleviating the humanitarian catastrophe, which is the worst in the world and created by the aggression coalition by waging a war for over five years and imposing a siege on Yemenis.

The minister noted that the continued disapproval of the entry of ships and tankers threatens the salvation government’s actions in countering the Covid-19 pandemic.