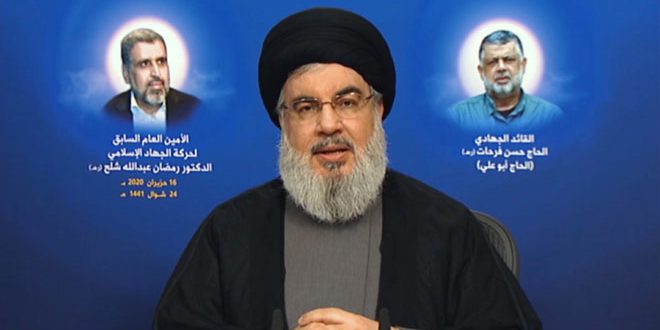 Secretary General of Lebanon’s Hezbollah, Sayyed Hassan Nasrallah has affirmed that resorting to “Caesar Act” by the US, which is the last of its weapons, is evidence on Syria’s victory in the military war against terrorism which it has been facing from about ten years, indicating that this act targets the Syrian people.

In a speech on Tuesday, Nasrallah said that Syria’s allies who have stood by its side politically and militarily will continue to support it in the face of the economic war.

He added that those who stood by Syria to remain unified and not to become subjugated to the US and “Israel” will not allow Caesar Act to inflict defeat on it.

Regarding the situation in Lebanon, Nasrallah called on the Lebanese Government not to submit to “Caesar Act”, stressing that if the Americans continue their efforts to starve the Lebanese people and bring us to the “bread for the resistance” equation, then we will have an important and dangerous equation that we will not reveal now

Russia, China: US sanctions on Syria increase suffering of its people