Russia, China: US sanctions on Syria increase suffering of its people 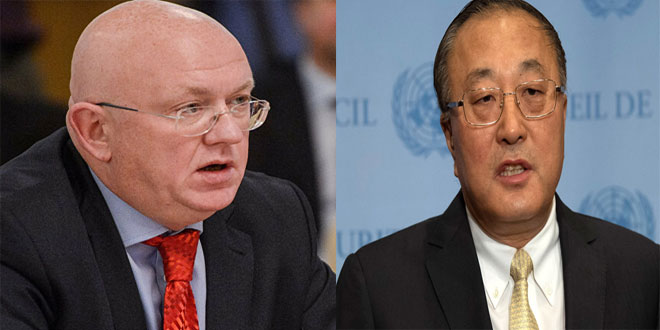 Representatives of Russia and China to the UN asserted that the US sanctions against Syria target the Syrian people and increase their suffering and the continuation of these sanctions represent an unethical act in light of Syria’s combat of coronavirus pandemic similar to the rest of the world’s countries.

In a statement during a Security Council’s session in a comment on imposing so-called “Caesar Act” by the US, Russia’s Representative to the UN Vassily Nebenzia noted that the US sanctions on Syria increase the suffering of the Syrians.

Russia Today website quoted Nebenzia as saying “According to what we have heard, the US officials boast that their sanctions in particular have resulted in the deterioration of the socio-economic conditions of the Syrian people to such degree.”

He added that the European Union extended its unilateral measures against Syria in late May, while Russia has repeatedly declared that these measures harm the Syrian economy and hinder the provision of humanitarian aid to the Syrian citizens.

In a similar statement, China’s Representative to the UN Zhang Jun called on the US to lift the unilateral coercive measures imposed on Syria, and he called for achieving a progress in the political process for resolving the crisis in the country.

He said we urge the United States to actively respond to the urgent appeal made by the UN Secretary-General and the UN Special Envoy for Syria to immediately lift unilateral sanctions.

The Chinese delegate stressed that the years of the Western economic blockade against Syria have caused great difficulties for the Syrian people, especially women and children, indicating that the US sanctions will inevitably hinder economic and social development in Syria and will negatively affect the Syrians’ livelihood, as they constitute an immoral act in a time when Syria is struggling like the rest of the world for tackling the coronavirus outbreak.

Zhang pointed out that the international community should be warned against terrorists who seek to take advantage of the current situation and should not be allowed to do so.

Earlier, Syria’s Permanent Representative to the United Nations, Dr. Bashar Al-Jaafari, stressed during the session that the policies of siege and the imposition of coercive economic measures unilaterally have been and still are part of the blind traditional western policies and another form of terrorism that has shed the blood of the Syrians and destroyed their achievements, stressing the necessity of lifting them.