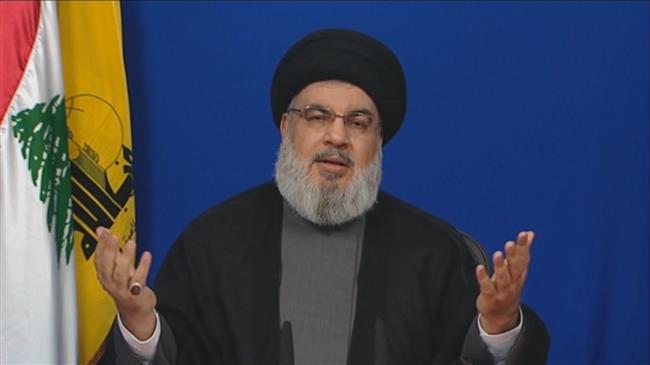 The Secretary General of the Lebanese resistance movement Hezbollah has censured the US interference in the country’s internal affairs, saying Washington’s hostile policy against Lebanon will not weaken the popular movement but will strengthen it.

Sayyed Hassan Nasrallah made the remarks during a televised speech broadcast by the Arabic-language al-Manar satellite television station in the Lebanese capital of Beirut on Tuesday.

Nasrallah blasted the US ambassador to Lebanon for “openly” meddling in the country’s domestic affairs and called on the Lebanese government to stand up against US provocations.

“The US ambassador to Lebanon has been openly interfering in our internal affairs. The US meddling in Lebanon is rejected and the Lebanese state must move in this regard,” the Hezbollah chief said.

“Your policy in Lebanon won’t weaken Hezbollah but will strengthen it and that blockade on Lebanon is futile, my advice is to abandon this policy,” Nasrallah underlined.

Moreover, the Secretary General of the Lebanese resistance movement lashed out at the US ambassador and said, “Don’t give lectures on human rights especially that your country is the great violator of human rights worldwide,” adding that, “Your country has funded terrorism in the region.”

In an interview with Saudi-owned al-Hadath television news network last week, US Ambassador to Beirut Dorothy Shea said Washington has “great concerns” over Hezbollah’s role in the Lebanese government.

The US has labeled the entire Hezbollah a terrorist organization and levied several rounds of sanctions on the Lebanese resistance movement as well as its top officials.

Hezbollah’s growing popularity in the Arab and Muslim world after the resistance movement shattered the Israeli military’s myth of invincibility during the 33-day military offensive on Lebanon in the summer of 2006 has been a matter of serious concern for the Tel Aviv regime and its Western allies.

The resistance movement’s heroic defense as well as its vehement opposition to any foreign intervention in Lebanon’s domestic affairs has turned the group into a major stakeholder in the country’s political and military domains.

‘Why are you afraid of Iran?’

During the televised speech on Tuesday, Nasrallah also dismissed accusations that Hezbollah wants to turn Lebanon into another Iran and said, “Iran is a self-sufficient model, why are you afraid of this model?”

The Hezbollah chief stressed that the hard living conditions and the economic crisis Lebanon has been witnessing require national approach and exerting united efforts by the entire Lebanese parties.

Since October, Lebanon has been in a financial crisis that has seen businesses close and prices and unemployment soar. The Lebanese pound has also continued to plummet against the US dollar.

Nasrallah went on to say on Tuesday that the movement could use all its capabilities in agricultural and industrial sectors to help overcome the country’s current economic crisis.

“As Lebanese people, we have to unite efforts in agriculture and in finding markets for our crops. And the same thing applies to the industry,” he said, adding, “We in Hezbollah, we call on the Lebanese to revive the agricultural and industrial sectors as one of the major factors of steadfastness.”

The Hezbollah leader concluded his speech by condemning the Israeli plan to annex significant portions of the occupied West Bank, saying, “Lebanon’s current crisis must not divert us from supporting the Palestinian cause especially now as the Zionist regime is planning to annex areas of the West Bank and Jordan Valley.”

The contentious plan — which would allow Tel Aviv to annex about 30 percent of the West Bank  — is in accordance with a Middle East scheme drawn up by the administration of US President Donald Trump and unveiled in January on the Israeli-Palestinian conflict.

The scheme — which Trump calls the deal of the century — largely gives in to Israel’s demands while creating a Palestinian state with limited control over its own security and borders, enshrining the occupied Jerusalem al-Quds as Israel’s “capital.”

The US-backed annexation scheme has drawn international criticism and triggered waves of protest rallies around the globe.

Israeli Prime Minister Benjamin Netanyahu had set July 1 as the date for starting the annexation plan’s implementation, but the move faced delays amid internal rifts and as Tel Aviv awaits a green light from Washington.