France, Germany and Britain are against Washington’s bid to reimpose sanctions on Iran 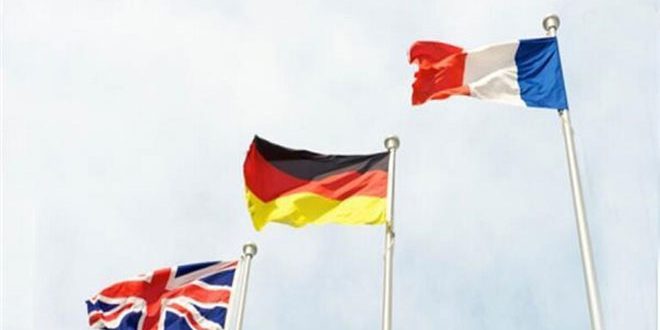 Paris – France, Germany and Britain announced their opposition to Washington’s request to the United Nations to re-impose sanctions on Iran.

France-Presse quoted the French Foreign Ministry as saying in a statement tonight: “France, Germany and Britain indicate that the United States is no longer a party to the Joint Comprehensive Plan of Action after its withdrawal from the agreement on May 8, 2018.

The statement added, “Our position on the justifications for the US speech was conveyed with complete clarity to the leadership of the UN Security Council and all its members in accordance with Resolution 2231. Therefore, we cannot support this initiative, which is inconsistent with our continuous efforts to support the Joint Comprehensive Plan of Action.”

On the other hand, the Russian RIA Novosti Agency, citing a diplomatic source, said that Russia had called for a meeting of the UN Security Council to discuss US steps to re-impose sanctions on Iran.

America suffered a miserable failure last Friday in the UN Security Council in its attempt to extend the arms embargo on Iran, which ends next October, as Russia and China opposed the American draft resolution, while Britain, France, Germany and eight other members abstained from voting, and the United States and the Dominican Republic were the only countries. Among the 15 board members who voted in favor of the draft resolution.
Source: Sana

Aug. 20: An Update of the Saudi Crimes, Violations in Yemen