The Armed Forces confirmed that their operation in Al-Bayda province targeted the largest gatherings of the Takfiri militias (ISIS and Al-Qaeda) who are strongly affiliated with the countries of the aggression, led by Saudi Arabia and backed by the US.

This came during a press briefing by the official spokesperson of the armed forces, Brigadier General Yahya Saree, in which he announced, on Friday, the success of the military operations in the areas of Qayfah (Walad Rabie and Quraishia) and neighboring areas in Al-Bayda governorate.

Brigadier General Saree clarified that since the first day of the Saudi-led aggression, these takfir tools have been participating the Saudi military aggression, and have been entrusted with several tasks during the past years, pointing out that the area of operations included the northwestern outskirts of Al-Bayda governorate, specifically in the districts of Walad Rabie and Qurayshia.

He added that progress was made on time according to the drawn plan, and several confrontations took place with the takfiri militias who are linked to the aggression through its intelligence services, indicating that the takfiri elements received direct sponsorship by the aggression and the mercenaries during the past years, including support with various weapons.

He affirmed that the countries of aggression supported the takfiris in Al-Bayda with money, air protection, medical care and facilities related to their movement to and from those areas, adding that the armed forces possessed documents confirming the participation of so-called Al Qaeda and ISIS elements in the Saudi military aggression on Yemen, specifically among their mercenaries on the ground.

The spokesperson pointed out that the military operation was preceded by extensive intelligence work in cooperation with the security services, which greatly boosted the success of the operation, and that during the implementation of the operation, dozen of raids were carried out by the Saudi aggression air force in an attempt to prevent the advance of Yemeni forces towards the takfirist sites.

He indicated that the operation was carried out within a week and the battle was resolved by eliminating that front that the Saudi aggression relied on to carry its criminal plans. The estimated liberated area is 1,000 km Square that was under the control of the so-called Al-Qaeda and ISIS elements, where several camps of those elements were established. The Yemeni force has taken control of 14 camps, including 6 camps that followed “ISIS” and the other camps belonged to “Al Qaeda.”

The camps were used for training, and some of them contained workshops for manufacturing explosive belts and devices. 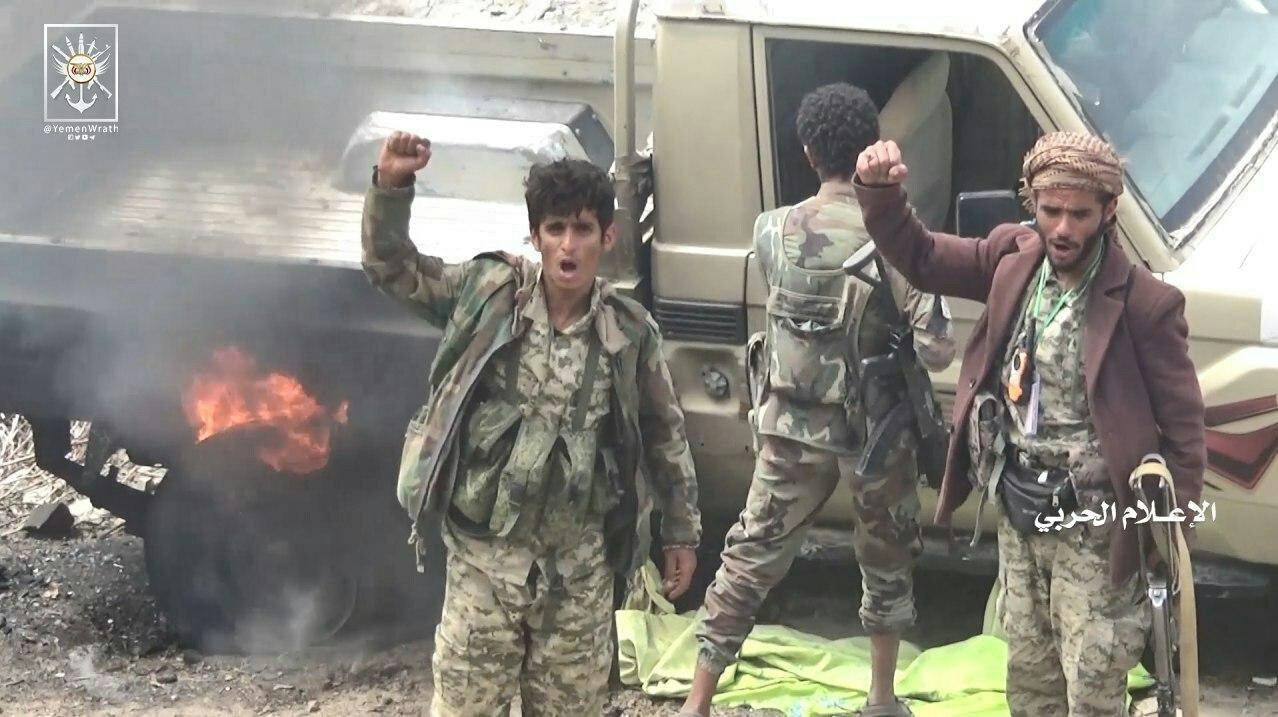 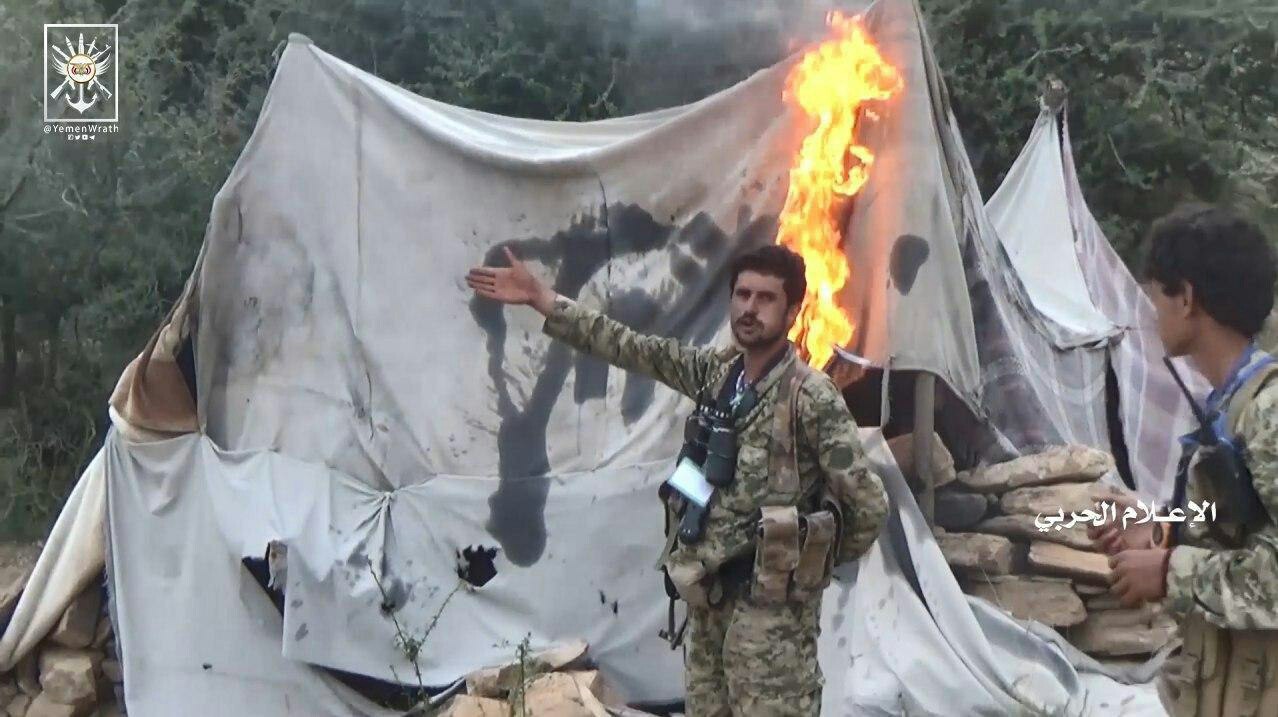 Takfiri tents being burned down during the operation

Regarding the human losses, the brigadier general affirmed that at least 250 of those elements had fallen between captives, dead, or wounded. Some of the killed elements had foreign nationalities. In addition, among the dead were 5 ISIS leaders, most notably the leader of the organization, the security official and the financial official.

“We are working militarily and on the security front to pursue the takfiri elements who fled to the areas under the control of the aggression, such as Marib and some areas in the south,” he added.

It was also made clear during the conference that the manufacturing workshops for explosive belts and devices were found and seized in the areas of operations, and that the liberated areas were used by the takfiri groups to carry out brutal crimes against civilians, and to target security and public tranquility.

“We have found full information and evidence that these elements carried out various operations during the past years in more than one Yemeni region, and we also obtained evidence proving coordination between the takfiris and other elements in an Arab and foreign country, while benefiting from the great support by the countries of aggression,” he noted.

Brigadier General Yahya Saree assured that the security services will announce the names of the leaders of the takfiri organizations and groups that managed to flee as they are required for justice, explaining that this important operation confirms the size of the actual link between the takfiri groups and the forces of aggression on Yemen.

He stressed that the United States of America, Saudi Arabia and the UAE are at the top of the countries which are linked with the takfiri groups, pointing out that the dozens of raids that were launched on the Yemeni forces during the operation are one evidence of the amount of support enjoyed by the so-called Al Qaeda and ISIS elements.

Addressing the families, Brigadier General Saree said, “We tell the families of the victims that the Yemeni armed forces conducted a huge blow against those Takfiri intelligence elements,” indicating that this operation and this achievement confirms the reality of these groups, the truth of their origin and purpose, and how the aggression uses them against the nation.

He added that the aggression is the one who supported the takfiri groups and is working to amplify their size through the media within what is known as “psychological warfare”, and that the leaders of the takfiris depend on young people who are deceived and try to mobilize more of them.

He pointed out that the last operation was attended by hundreds of people from Al-Bayda Governorate, whether from the armed forces or from the tribes and praised the role of the sheikhs and all of the people of al-Bayda.

Aug. 20: An Update of the Saudi Crimes, Violations in Yemen

The occupation breaks into Wadi al-Hummus, north of Bethlehem, and threatens to demolish two Palestinian homes