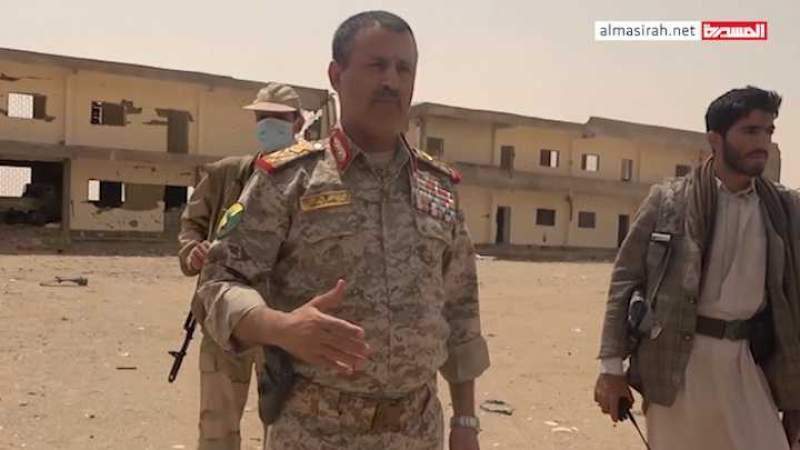 The Minister of Defense, Major General Mohammed Nasser Al-Atifi, confirmed that through ancient and modern history, the Yemeni land never accepted invaders and occupiers on its soil.

“Today, our Yemeni people possess the factors of strength that will not only enable them to defeat the new invaders and inflict crushing defeats on them but will also make Yemen a power of fear at the regional level,” he said.

Major General Al-Atefi indicated in his speech to the fighters in the al-Khanjar area, in the presence of the commander of the Khub Wa al-Sha’af front, Brigadier General Abdul Hakim Saree, that there is no truce with the Saudi aggression that seeks to impose an occupation in Yemen, stressing that the only option is to continue the confrontations.

“We pledged our souls for the sake of defending the homeland and values, and our hands will remain on the trigger and achieve victories after victories until we complete the liberation of all Yemeni soil and restore the national sovereign decision,” he added.

The Minister of Defense called on the forces of invasion and occupation to leave the Yemeni land … and warned, “Our people and their armed forces are determined with confidence and competence to move forward to comprehensive strategic options on land, sea, and air, and that the Yemeni deterrent force is able today more than ever to force the invaders to the humiliating withdrawal.”

“We promise the Yemeni people and the honest, free people that there will be no invaders or occupiers on Yemeni soil,” he stressed.

The military forces in the al-Khanjar renewed the pledge to implement the tasks assigned to them, stressing that they will take strong and vast revenge against the crimes committed by the Saudi aggression on Yemeni children and women.

Most Vital Sectors Are Only Supplied With 12% of Its Oil Needs: Oil Company Director