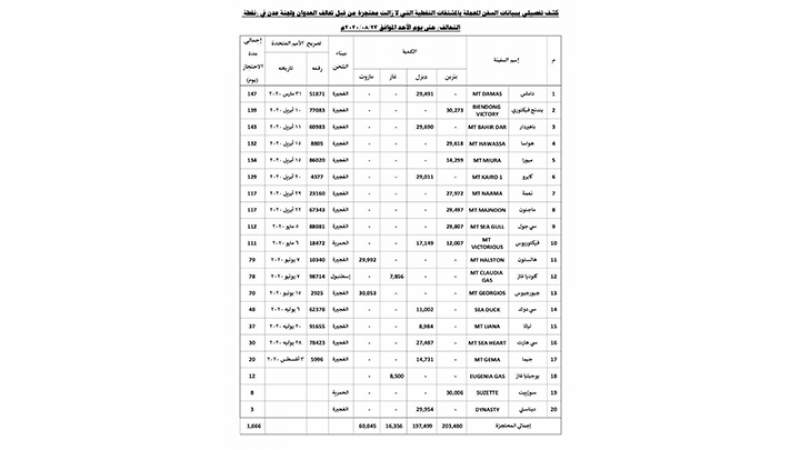 The Yemeni Oil Company announced that the forces of the US-Saudi aggression (coalition) are still holding 20 oil tankers, including two ships loaded with diesel and two ships carrying domestic gas, despite being subjected to the inspection mechanism and obtaining UN permits.

The company stated in a statement published on its Facebook page that the aggression coalition continues to detain (16) oil ships with a total tonnage of (400,979) tons of gasoline and diesel, for varying periods, the maximum of which is for a period of 147 days.

In addition, it emphasized that the aggression’s detention of ships is a clear violation of the Human Rights International Convention, the rules of international humanitarian law, and all applicable laws.

The company stressed that the detention violates and neglects the Sweden agreement, which states to facilitate the arrival of basic materials and humanitarian aid to the port of Hodeidah in a manner that meets the needs and aspirations of the Yemeni people.

Moreover, the Yemen Petroleum Company noted that these realistic data completely contradict what was stated in the briefings of the UN envoy to Yemen Martin Griffiths, before the Security Council, on January 16, 2020, and on October 22, 2019, during which it was claimed that fuel ships entered Hodeidah port without any obstacles.

The oil company considered that the United Nations is prejudice to the aggression coalition as it allows the detention of the oil derivative ships and impending humanitarian disaster as a result of the suspension of service sectors.