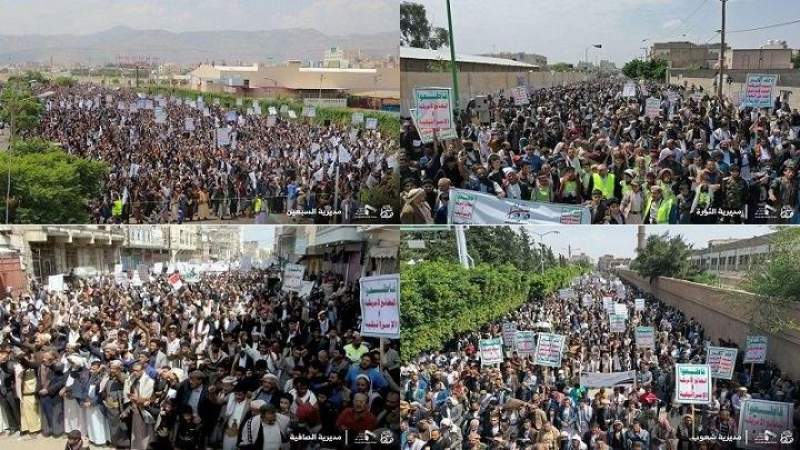 On Sunday morning, Various areas in the Yemeni capital, Sanaa, and all of the governorates, witnessed massive rallies to commemorate Ashura, the martyrdom of Imam Hussein, peace be upon him. 10 rallies took place in the capital, Sana’a.

During the events, words and poems were said regarding the revolution of Imam Hussein and how he confronted tyrants and oppressors. The events also mentioned the tragedy of Ashura and how it has impacted the Islamic nation since.

The words linked the tragedy of Imam Hussein when he stood alone in front of the delinquents and oppressors, with the tragedy of Yemen, today, as it has been in a war alone for six years before an unjust Saudi-American aggression, during which crimes against children and women have been committed.

The words recalled the Qur’an verses and the authentic noble hadith of the Prophet in love for Hussain and the family of the Prophet.

During the event, people were called to continue confronting the Saudi-American-Emirati aggression and supply the front lines with financial aid and recruits, to achieve liberation from the hegemony of the nation’s enemies.

Moreover, participants stressed their support to the Palestinian cause, saying the liberation of occupied Palestine is a must and rejecting the American hegemony in the region. A denunciation was also declared on the Emirati-Zionist normalization.

During the event that was held in various areas, there were songs, dances, and artistic presentations that expressed the tragedy of Ashura.

It is worth noting that dozens of rallies took place this morning in the Yemeni capital and all other governorates under the control of Yemen to mark Ashura day.

In previous days, thousands of events, gatherings, seminars, and lectures were held in various Yemeni cities, districts, villages and regions to commemorate the martyrdom of Imam Hussein.

August 30: An Update of the Saudi Crimes, Violations in Yemen