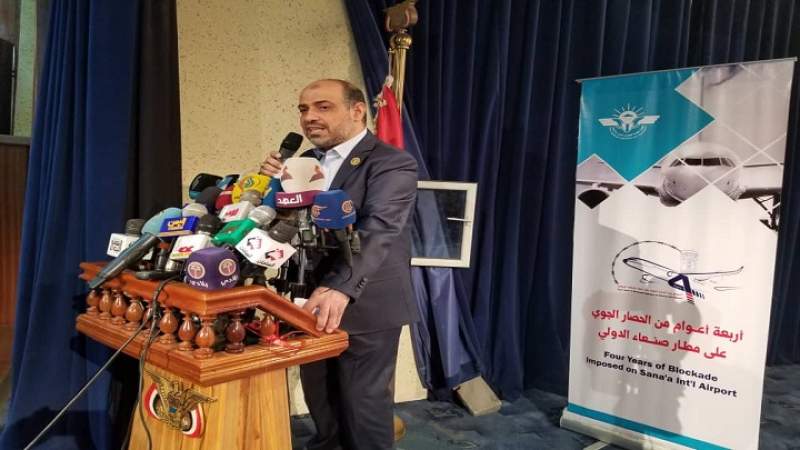 Due to Lack of Fuel, Sana’a Airport Ceases UN Flights

The Minister of Transport, Zakaria Al-Shami, announced the closure of Sana’a International Airport to the United Nations and international organizations within the next few days due to the depletion of oil allocated to the airport.

An event was held today, Sunday, under the title “Four Years Since the Closure of Sana’a International Airport”, which was organized by the Ministry of Transport and the General Authority of Civil Aviation and Meteorology.

In the event, Minister Al-Shami indicated that the aggression is seeking by its aggressive war on Yemen is to accomplish any achievements after its military failure for over five years.

He explained that the continued detention of oil derivative tankers and preventing their entry to Hodeidah port is causing a humanitarian catastrophe for the Yemeni people, especially patients in hospitals and also newborns, indicating that more than 540,000 patients need to travel abroad for treatment, but they still face an unknown fate due to the closure of Sanaa International Airport.

He pointed to the inability of the United Nations to lift the blockade on Sanaa airport, which is the main artery for two-thirds of the population in the Republic of Yemen and considered the first gateway to the world.

“The aggression closed Sana’a International Airport on all Yemeni people, so the Corona pandemic came and closed all their airports, and their land and seaports,” minister said.

The Minister of Transport stated that the closure of Sanaa International Airport came according to a decision by the Saudi Ministry of Defense, in violation of international conventions and treaties, explaining that the aggression through its blockade confirmed the ineffectiveness and neutrality of the role of the United Nations.

For his part, the head of the General Authority for Civil Aviation and Meteorology, Dr. Mohammed Abd al-Rahman Abdul-Qadir, stated that the forces of aggression will be broken and will be defeated by the determination and steadfastness of the Yemeni people who have proven throughout history that Yemen is a cemetery for invaders.

He pointed out that Sana’a International Airport will be closed to international flights and international organizations due to the shortage of oil products due to the detention of oil derivative ships and preventing their entry to the port of Hodeidah.

In addition, he noted that the Saudi aggression had destroyed the airport infrastructure, communication and communications devices, and the radar system, with the aim of paralyzing the air navigation traffic of Sanaa International Airport.

A statement issued during the event, and was read by the head of the organizing committee of the event, Director of Air Transport, Dr. Mazen Ghanem, confirmed that the closure of Sana’a International Airport came according to a decision from Saudi Arabia on the ninth of August 2016, to suspend flights to and from Sanaa airport.

He considered this an illegal and inhumane measure, indicating that the imposition of the air blockade on Sanaa International Airport had isolated Yemen, restricted the freedom of millions of Yemenis and disrupted the movement of navigation in front of vital and commercial supplies for citizens.

The statement mentioned that the imposition of the air blockade on Sana’a International Airport exacerbated the suffering and deprivation of thousands of Yemenis from traveling abroad to receive treatment … indicating that the Ministry of Health statistics indicated the death of more than 80 thousand patients who were not able to travel abroad for treatment. 450 thousand are in need to travel, as 25-30 cases die every day.

According to the statement, there are more than 65 thousand patients with cancerous tumors threatened with certain death, and more than 8,000 patients with kidney failure need urgent kidney transplantation. In addition, one million patients are threatened with death due to the lack of drugs for incurable and chronic diseases, solutions and medical supplies that require aerial transport.

The statement also affirmed that the continuation of the ban on Sana’a International Airport has prevented more than four million expatriates from returning to the homeland, in addition to thousands of students who lost their scholarships due to their inability to travel to complete their studies, and ceased the interests of many businessmen.

The Ministry of Transport condemned the continued failure of the United Nations to fulfill its obligations to operate an air bridge for humanitarian flights for patients through Sana’a International Airport, which confirms the lack of seriousness of the international community and the United Nations in taking action to stop the human tragedy resulting from Saudi-led siege.

The Ministry of Transport renewed the demand of the United Nations and the Security Council to work in accordance with the rules and provisions of international humanitarian law and human rights that were approved to protect human beings.

Moreover, the statement called for taking serious actions towards the continuation of the air blockade imposed on Yemeni airports, despite the issuance of an international resolution by the Security Council to lift the air blockade of Sanaa International Airport in front of civilian flights.

September 5: An Update of the Saudi Crimes, Violations in Yemen

Health Spokesperson Warns of a Complete Stop of the Health Sector