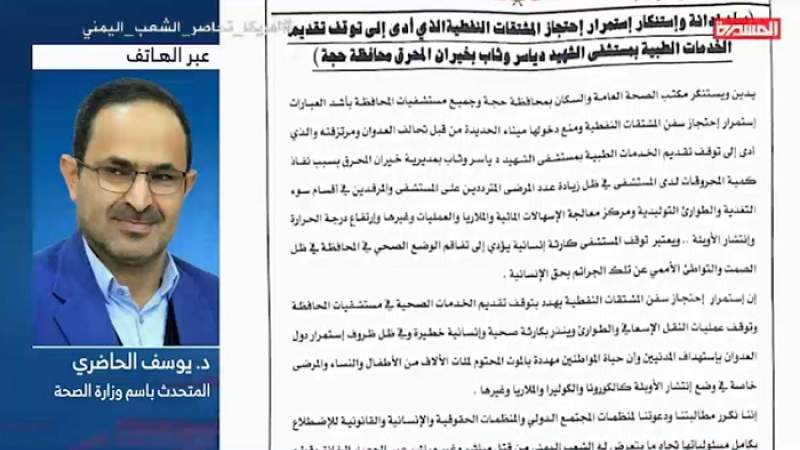 Health Spokesperson Warns of a Complete Stop of the Health Sector

The spokesman for the Ministry of Health, Dr. Youssef Al-Hadri, warned of the total suspension of all health facilities due to lack of fuel as a result of the Saudi aggression’s detention of oil derivative ships.

“It is expected that a number of hospitals will close during the upcoming period due to the oil derivatives crisis,” Al-Hadri said.

The health spokesperson stated that international organizations do not pay serious attention to the humanitarian crisis in Yemen and are only concerned with collecting funds.

He pointed out that more than 400 governmental and private hospitals in the republic suffer from the oil derivatives crisis.

The Public Health Office in the Hajjah governorate had announced that all medical services at the Martyr Dr. Yasser Wathab Hospital in Khairan Muharraq have stopped due to the hospital’s fuel shortage as a result of the Saudi prevention of the entry of fuel tankers to Yemen.

Due to Lack of Fuel, Sana’a Airport Ceases UN Flights

September 7: An Update of the Saudi Crimes, Violations in Yemen