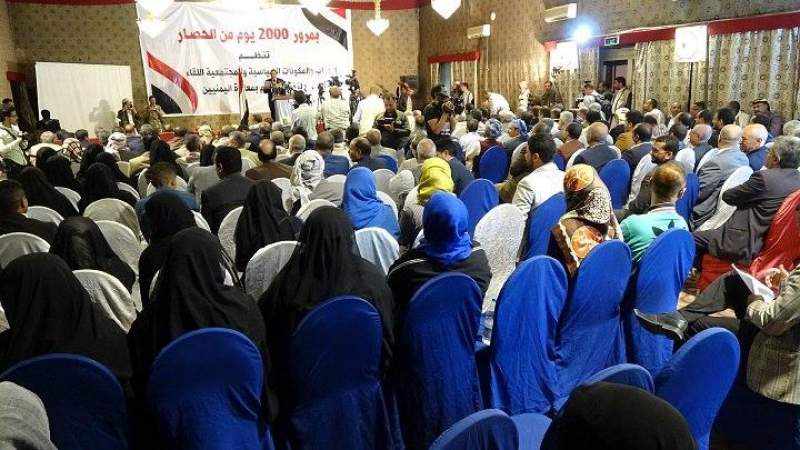 The political parties and components held, today, Saturday, in the capital, Sana’a, an expanded meeting to mark the passage of 2000 days of steadfastness against the aggression and its siege.

A member of the Political Bureau of Ansar Allah Fadl Abu Talib considered in a speech that the occasion of the passage of 2000 days of steadfastness is an important station to remind of Yemenis suffer and the repercussions of aggression and siege on all of Yemen.

Abu Talib confirmed that the United States is behind the Saudi aggression against Yemen and is working to provide all means of support for it, indicating that the aggression imposed a siege on the Yemeni people to isolate the country and prevent the delivery of humanitarian supplies.

He noted that the aggression regimes bet on America and “Israel” to resolve their battle, and the Yemeni people have wagered on Allah, steadfastness, its own capabilities, and also it’s military and security achievements.

He pointed out that today the facts are unfolding after the UAE and Bahrain normalized relations with Israel, stressing that no matter the size of the Saudi aggression and its capabilities, the aggressive coalition is still in a position of weakness, shame, and considered the aggressor, and Yemen is in the right position.

In turn, the Secretary-General of the Congress Party, Ghazi Al-Ahwal, considered the Saudi-led aggression against Yemen and siege is happening with international complicity that encouraged the continuation of war crimes and crimes against humanity.

He noted that Yemen is facing the worst humanitarian crisis in the world and more than two-thirds of the country’s population are suffering as a result of the comprehensive blockade and the closure of Sana’a airport.

Al-Ahwal pointed out that mercenaries’ government is taking massive mistakes regarding the economy by printing money without a cover, in addition to stopping the payment of salaries, which has exacerbated the suffering of citizens.

Ghazi Al-Ahwal called on the Yemeni people to be more steadfast and to strengthen the internal ranks between political parties and components.

For his part, Minister of Youth and Sports Hassan Zaid stressed in a speech by the Joint Meeting Parties that after 2000 days of aggression and siege, Yemen is still stronger and more capable to defend itself and achieve many wins.

In turn, Yahya Abu Asba, head of the Central Committee of the Socialist Party, considered that talking about 2000 days of aggression should be an entry point to search for solutions, stressing that the parties should work to find a Yemeni-Yemeni solution that ends divisions, stops the war, and ends the Saudi aggression on Yemen.

As for the Minister of State, Ahmed Al-Qana, a spokesman for the Southern Movement, he considered that after the steadfastness of two thousand days, we need national unity for all political forces to preserve sovereignty and decision, stressing that Yemen is the unifying identity of all the Yemeni people, and the resistance to aggression unites us.

For his part, Mohamed Taher Anam, Secretary-General of the Rashad Party, called on all the people of the world to raise their voices against the unjust blockade and demand the allowance of oil and food ships to enter and reach the port of Hodeidah.

He pointed out that the meeting comes as a strengthening of the will, steadfastness, and cohesion of all Yemenis, as it is an affirmation of the solidity and strength of the Yemeni people.

He held the United Nations and the international community responsible for the continuation of the siege crime and its catastrophic repercussions on the service sectors.