An Important Statement Regarding the Saudi Blockade Against Oil Tankers: YPC

The blockade imposed on oil derivative ships throughout the past phases has not witnessed such a level of escalating crime during 130 days from late May to the present day, and the coalition of aggression countries continues to piracy fuel ships and detain them under international cover despite obtaining UN permits after being subject to procedures of the committee of Verification and Inspection (UNVIM) and deliberately endangering the lives of more than 26 million citizens and constricting their lives, threatening all sectors with the collapse of their operational capacity and stopping in a grave violation of all international laws and humanitarian norms. In this regard, the company affirms the following:

1 – The aggression forces are still holding 19 ships loaded with fuel, 5 of which are detained, with periods of detention reaching half a year, while detention periods of 4 other ships have reached a period of more than 5 months, in addition to 3 ships that exceed 3 months of detention.

2-The total fines resulting from the seizure of oil derivative ships amounted to approximately $ 121 million, including $ 31 million during the year 2019 AD and nearly $ 90 million total fines for the year 2020 AD until the end of last September.

3-The fines for piracy of currently detained fuel ships amounted to 47 million dollars until the end of September 2020, an amount that can be increased as long as the ships remain in custody, and this amount is more than three times the customs duties imposed on the currently detained shipments that are taken by the countries of the coalition of aggression and the United Nations as an excuse to continue Vessel detention.

4- Within 130 days, 14% of the actual need in normal conditions of petrol and diesel was released, with a total amount of 139 thousand tons loaded on 5 ships, where the entry of the last ship was at the end of last July, meaning that no ship was released during the past two months Oil to cover general needs.

Thus, all those burdens on the citizen’s shoulders are multiplying day after day without the concerned people in the international and international formations feeling ashamed of their indifference to the humanitarian aspects and their continuing to feed and reinforce the causes of human suffering, and this small percentage of the released quantities clearly confirms the level of ugliness and shamelessness of the forces of aggression. The extent of the international disregard for human values and international responsibilities and its total devotion towards oil affairs, operating expenses, and the pursuit of collecting troubled financing pledges, and what this entails from making more concessions, leading to its public alignment with the forces of international crimes and piracy away from the aspirations of Yemeni citizens and their economic and living priorities.

Accordingly, we reiterate that the forces of aggression and the United Nations are responsible for the effects and consequences of the detention of oil derivative ships and all the grave economic and living violations resulting from the continuing maritime piracy and its catastrophic repercussions on various vital sectors, chiefly health, water, hygiene, communications, transportation, electricity, agriculture and other sectors that we must in the company The Yemeni oil supplies it with its needs of petroleum materials, how we call again all the liberals and humanitarian and human rights organizations at home and abroad to continue the activities of practical solidarity to pressure the forces of aggression and the United Nations to release all the detained ships and to stop the practices of maritime piracy in the future.
Best Regard, 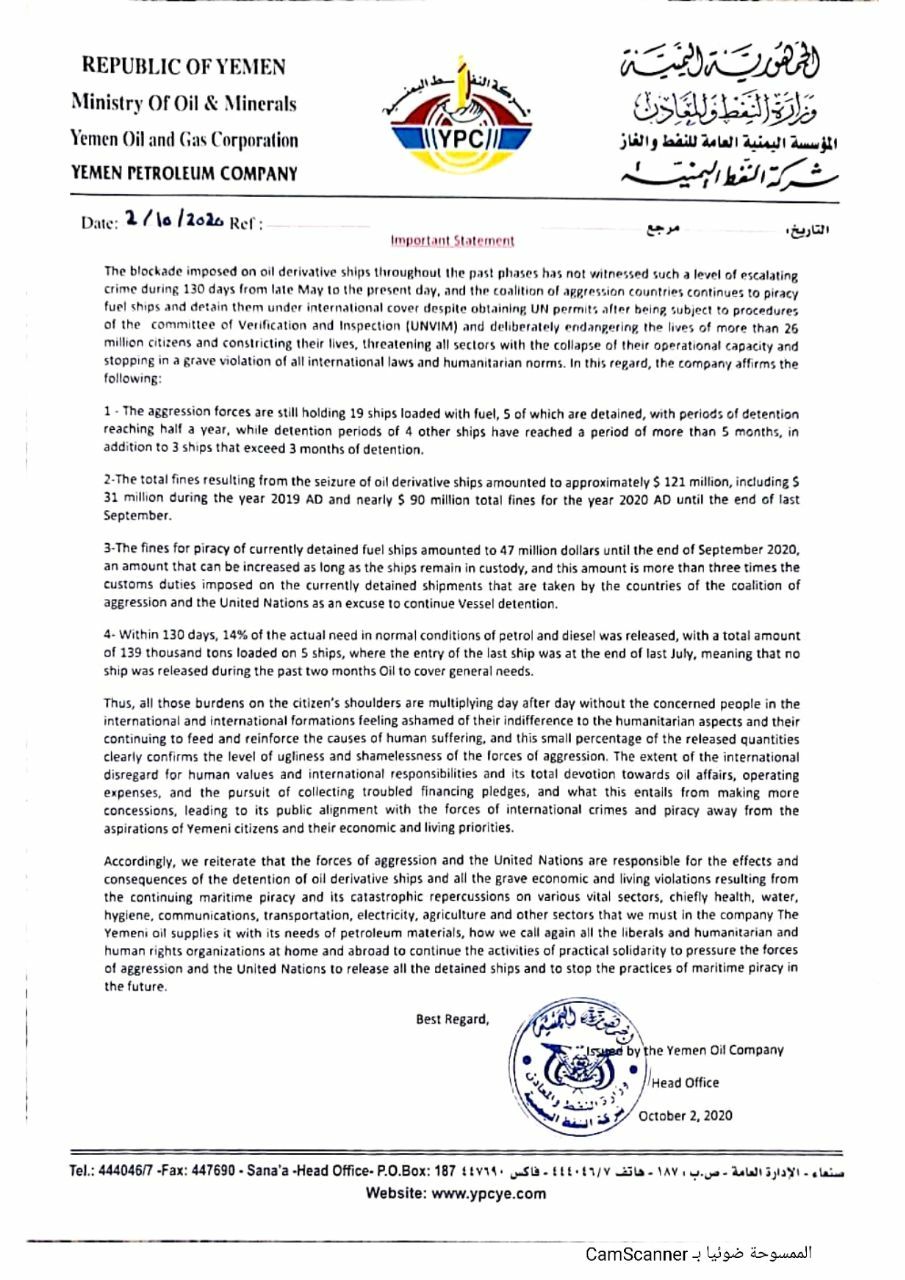 Oct. 1: An Update of the Saudi Crimes, Violations in Yemen