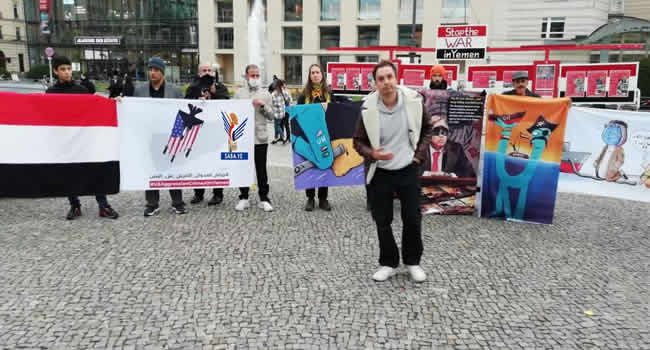 The Yemeni community in Germany organized a protest stop in front of the U.S embassy In the capital city of Berlin, to condemn the crimes of the American aggression on Yemen.

The Yemeni community and a number of German activists denounced the crimes committed by the coalition of aggression in Yemen which amounts to war crimes under international laws.

They denounced the silence of the United Nations and international human rights organizations regarding the US-Saudi aggression against the Yemeni people.

“Stopping the aggression and lifting the siege imposed on the Yemeni people at the forefront is Sana’a International Airport”, the statement issued by the protest stand called.

They also demanded that oil vessels derivative and foods be allowed to enter the port of Hodeidah.

The statement held the international organizations, the coalition countries, and those who support them fully responsible for the suffering of the Yemeni people, and the humanitarian catastrophe that threatens Yemenis.