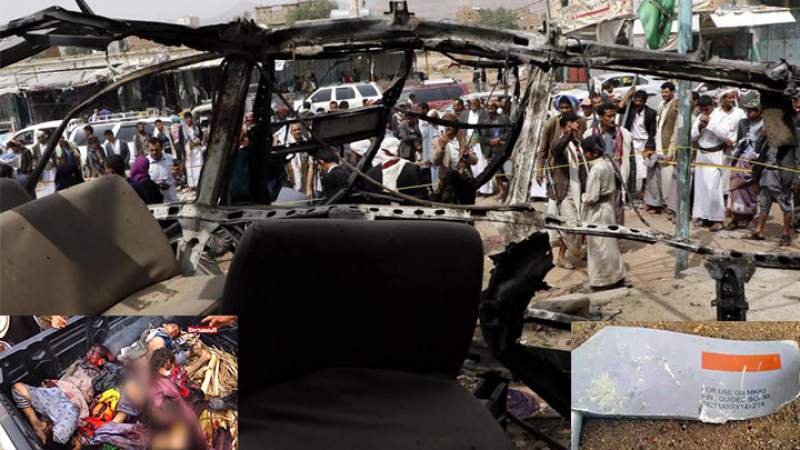 US Sells 3000 Smart Bombs to the Saudi-led Aggressive Coalition

The US Department of Defense (the Pentagon) announced that the US State Department agreed to sell 3,000 smart-guided bombs to Saudi Arabia in a deal worth up to $290 million.

The US approval of the deal is a clear indication of their desire to continue participating in the aggression and in committing massacres against the Yemeni people.

“The potential sale would include 3,000 GBU-39 Small Diameter Bomb I (SDB I) munitions, containers, support equipment, spares, and technical support,” the Pentagon said in a statement.

“The package will improve Saudi Arabia’s ability to face current and future threats by increasing its stocks of long-range and accurate air-to-ground munitions,” it claimed.

“The size of ammunition allows for an effective munition with less collateral damage,” explaining that Boeing is the main contractor for the deal with Saudi Arabia.

The Pentagon’s Defense Security Cooperation Agency notified the Congress of this potential deal on Tuesday, noting that the United States is the largest exporter of arms to Saudi Arabia, followed by Britain and France.

Since the beginning of the Saudi aggressive war on Yemen, more than 45,000 Yemeni civilians have been killed and injured as a result of the direct bombing of the Saudi-American coalition. Most of these victims were targeted by American weapons and ammunition and led to the worst humanitarian crisis in the world, according to the United Nations.

The deal refreshed the memory of Yemenis regarding one of the most brutal Saudi massacres committed with the use of an American rocket, which goes back to August 9, 2018. It was the targeting of a school bus carrying students and going on a trip in Dhahian region. The rocket was a US-made 227-kilogram laser-guided missile that was sold to Saudi Arabia as part of an arms deal approved by the US State Department.

The serial numbers of the missile parts and remnants approved the rocket was originally from “Lockheed Martin” company that specializes in the US military industries and in particular the model (MK82), which symbolizes missile guided by laser beams.

In addition, the Saudi-led coalition fired the missile from a US-made jet when it killed those children, resulting in the killing of more than 50 people, most of them children, and wounding about 80 others.

In a similar massacre, Saudi Arabia used American missiles in the massacre of the “Great Hall”, as Saudi Arabia fired missiles where a funeral was taken place and thousands were offering their condolences in the capital Sanaa, in October 2016, which led to the killing and wounding of hundreds.

In independent statistics, the Eye of Humanity Center for Rights and Development revealed, last week, the statistics of crimes conducted by the Saudi coalition of aggression for the past 2100 days of the war on Yemen.

The center stated that the number of destroyed and damaged facilities in the infrastructure of Yemen reached 9526, indicating that the aggressor caused the destruction and damage of 15 airports, 16 seaports, 305 power stations and generators, 545 communication stations.

The statistic confirmed that the aggressors deliberately destroyed and targeted 2,181 reservoirs and water networks, 1974 government installations, and 4,490 bridges.

It is ironic that the US State Department itself called on its Saudi partner to investigate some of the crimes committed against the Yemeni people, as stated by its spokeswoman when it called on the Saudi regime to investigate the Dhahyan bus “incident”, and the US Secretary of Defense James Mattis at the time claimed that he assigned a military commander to go to Riyadh, to investigate what happened in this crime.

The US keeps neglecting the brutal war on Yemen that is led by the Saudi regime, in a way to mislead the world of the crimes being committed in this poor country. However, this does not mean that the US and Saudi Arabia are considered criminals, at least no in the eyes of the people of Yemen.

Sources Reveled :Oil Sector No.9 is Being looted By Saudis