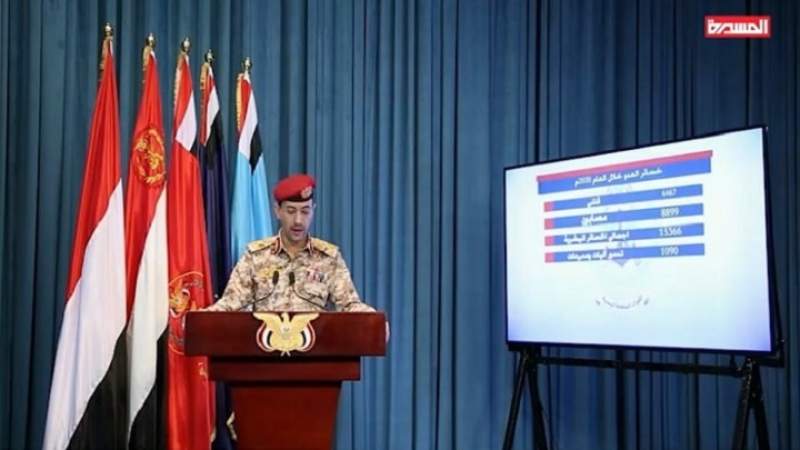 The spokesman of the armed forces, Brigadier General Yahya Saree, revealed the statistics of the airstrikes that were carried out by the US-backed Saudi-UAE-led aggressive coalition on Yemen during the year 2020.

The statistics also show the number of military achievements carried out by the army and the popular committees on various fronts.

Brigadier General Yahya Saree pointed out in a press briefing today, Monday, the number of losses incurred by the aggressor and their mercenaries.

Moreover, the spokesman of the army sent several warning messages as 10 vital targets within the Saudi depth have been added to the “bank of targets” that will be targeted if the leadership decides to.

Brigadier General Saree affirmed that the US-Saudi fighters launched more than 8888 air raids during the year 2020 in more than 13 Yemeni governorates. 8,478 of which were launched by the warplanes, while 410 raids were carried out by drones.

The most hit province was the province of Marib, which was subjected to more than 3,621 raids, followed by Al-Jawf governorate with more than 1981 raids, and Saada governorate with more than 726 raids and the rest of the raids were distributed to the rest of the governorates as follows: Al-Bayda (611 raids), Hajjah (496 raids), Sana’a (459) A raid), At the Yemeni-Saudi border (324 raids), Amran (122 strikes), Sanaa(62 strikes), Hodeidah (46 raids), Al-Dhale` (24 raids), Taiz (two raids), Abyan (two raids), Shabwa (two raids), despite the airstrikes conducted by drones.

Brigadier General Saree then noted about the Saudi continued violations being committed in the governorate of Hodeidah, which varied between artillery and missile shelling, the use of light and medium weapons, building fortifications, sending reinforcements, making offensive attempts, as well as carrying out airstrikes and hovering over the province. The spokesman pointed out that a crime was committed a few days ago in Hodeidah by the aggressor, for they have targeted a wedding hall and resulted in heavy casualties, including women and children.

“This crime and other crimes confirm the real purpose behind this aggression and its followers, who are traitors and agents,” The spokesman of the Yemeni army said.

He pointed out that the airstrikes launched by the Saudi-led coalition, backed by the US, during the year 2020, resulted in the death and injury of hundreds of Yemenis in various regions. In addition, it resulted in the damage of civilians and public property, stressing that the competent authorities continue to document the crimes and damages resulted by the aggressors so the crimes do not become forgotten and to always remember the criminals and killers.

He explained that the armed forces are fully aware that it is their duty to defend the Yemeni people and respond to every crime being committed by the Saudi aggression and its mercenaries, indicating that the continued crimes constituted one of the main reasons for the armed forces to carry out specific vital strikes in the depth of Saudi Arabia, as well as targeting its mercenaries within Yemen.

282Violations In Hodeidah , and Airstrikes On Marib, Saada, Asir