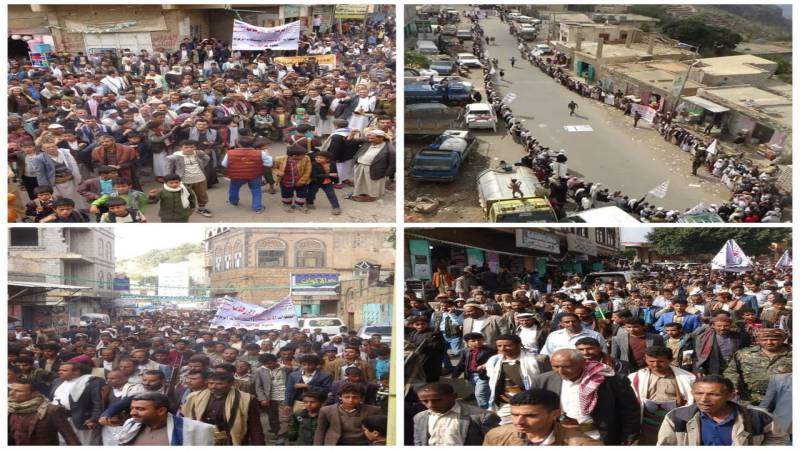 Civilians in the Al-Mahweet governorate took the streets to condemn the US designation of Ansarullah as a terrorist organization.

The protest, which witnessed a massive crowd, released a number of statements stressing that this reckless decision will only increase the steadfastness of the Yemeni people and confrontation.

The statements confirmed that the decision made by Trump’s administration in its last days is meaningless, saying that even if it gets approved by congress, they will put it under their feet.

During the massive demonstration, slogans were raised expressing the brutal US policies that they force against people all around the world.

In another rally, the Local Council and the Supervisory Office of the Safia district in the Yemeni capital Sanaa denounced the American decision to designate Ansarullah as a terrorist group.

Participants confirmed the rejection of the classification of the US department of state that organized Ansarullah as a terrorist organization, noting that Ansarullah resemble a large portion of Yemenis and are the ones leading the battle against the aggressors to achieve sovereignty, independence.

Participants condemned the arbitrary decision that comes within the framework of terrorism and arrogance practiced by the administration of Trump against the peoples and countries that reject the Zionist-American plan in the region.

A statement issued by the rally denounced the US State Department’s designation of Ansarullah as a terrorist organization, warning of the negative consequences and repercussions of the decision and its impacts on the political process in Yemen.

Moreover, the statement called on the Yemeni people to continue supplying the fronts with recruited men and money, in addition, to boycott American products.