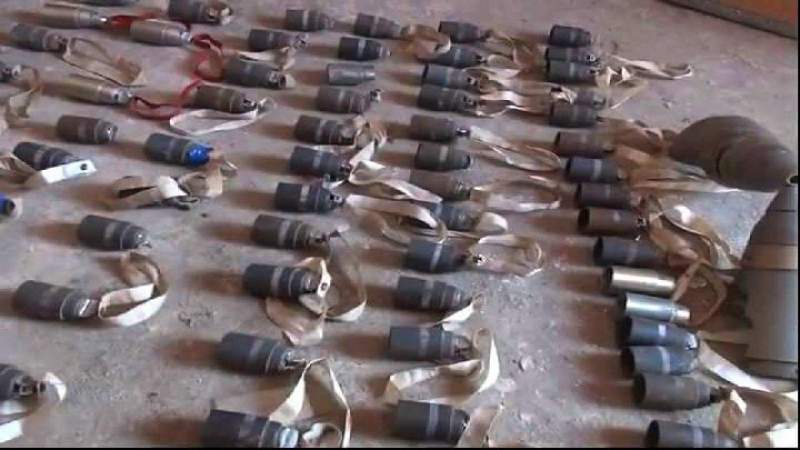 The Director-General of the Executive Center for Mine Action, Ali Safra, revealed today, Sunday, the statistics and damages caused by cluster bombs that were used by the aggressors in Yemen.

According to the Al-Masirah Arabic channel, Safra stated that the center has accurate statistics, and there are 8 types of cluster bombs that have been used in Yemen, which were manufactured by the United States, Britain, and Brazil.

He noted that there are also 13 types of cluster bombs that do not carry any data for their manufacture and were launched on several areas, such as the ones dropped on farms in Hajjah governorate.

“The statistics of cluster bombs discovered in separate areas of Yemen amounted to 3179 cluster bombs,” he said.

“Statistics of victims from cluster bombs are more than 1,000, people, most of whom are women and children within agricultural and grazing areas,” he added.

The Director of the Executive Center for Mine Action confirmed that 9 governorates were heavily hit by cluster bombs, which are Saada, Hajjah, Sanaa the capital, Hodeidah, Al-Jawf, Amran, Al-Mahweet, Dhamar, and Taiz.

“According to international standards, 91 per cent of cluster bombs are destructed in place, and our center faces a major problem for several reasons,” he said, pointing out that a new type of bomb is being dealt with and the United Nations has not provided us with the materials to get rid of the catastrophic remnants.

Safra stressed that the Saudi coalition of aggression prevented the entry of the Thayer-Martin material needed for destroying remnants of cluster bombs in their places.

“These difficulties have pushed the national program to deal with mines and carry out its tasks and a number of people have been sacrificed for this humanitarian work,” he added.

The center plans for the year 2021 aim to reach places that have not been analyzed in the past years.

Executive Director Ali Safra indicated that these statistics were not based on a comprehensive field survey, but rather on what they were able to reach in targeted areas as a result of the continuing war.